My father, Raffaello (Ralph), was barely a first generation American, having been born only a matter of months after his parents arrived here by way of Ellis Island before WWI. His initial tongue was Italian, he was given a traditional christening by immigrant Catholic clergy, and his upbringing was by all measures one wholly Neapolitan.

Because of this, I’ve always found it odd that he was assigned to serve in the U.S. Army Air Force in Italy during WWII, only 30 years after his then-still-living parents had originally emigrated.

Civilian Japanese-Americans were interned in concentration camps back home, and those U.S. soldiers of Japanese descent were assigned to other (non-Pacific) theaters of the war, but no such proscription appears to have been directed at a majority of, if any, American servicemen with Italian antecedents. Quite the contrary, my father’s squadron appreciated his cultural familiarity and translation abilities in dealing with locals and any captured Italian soldiers.

Ralph was not one to talk about himself in his ninety-one years, so the few stories I know of his service, including his Bronze Star, have come from official dispatches, old letters, and the tales of his squadron-buddies at reunions. This includes the time when Ralph was roused from his tent in Telergma, Algeria, to see an emergency patient… which turned out to be one of the local Berber chieftain’s donkeys (and it lived despite its grievous injuries). But that’ll be a post for another day.

Despite being flight-surgeon for the unit, my father was known on occasion to accompany his pilot friends on sorties. This was because he enjoyed flying and the camaraderie, notwithstanding the obvious risks. Ralph was not a man to whom it was easy to feel close, and over later years his friends – his only friends – were those with whom he had served in the Mediterranean theater.

What follows is an interesting previously-unpublished story that was only recently related to me by one of the few surviving veterans of the squadron, a colleague of my father’s who is now in his nineties and who served as a gunner onboard the B-26s.

I’ll let this nonagenarian’s words speak for themselves:

“I am not certain of the exact date, but I remember that it was in August of 1943. On one mission, we encountered the only Italian fighters of the war. Up until that point, and afterwards, all of our intercepts had been by Luftwaffe planes. On this day, we had a dozen B-26s that had gone to bomb a port and rail facility guarded by the Wehrmacht, but cloud cover had prevented the bombing run, and the formation was headed back to base. Before long we saw fighters approaching us that looked differently than the usual interceptors. Once closer, we could see that they bore the tail, fuselage, and wing insignia of the Regia Aeronautica. At the time I didn’t recognize them, but later, reviewing photos and reading specs, I’m pretty sure these planes – about six of them – were the Macchi C200 Saetta (‘Thunderbolt’). The Saetta was a very maneuverable fighter with all-metal paneling, a powerful air-cooled engine, twin machine guns, and exceptional stability in high speed dives. Though Italy produced over 1000 of the Saetta during the war, we had never encountered any of them before. 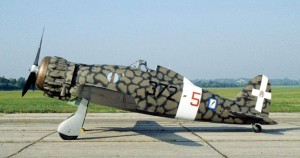 When dealing with Germans, I usually waited until an approaching fighter was almost in range, and then fired a long burst in the hopes of discouraging him. As this was the first and only time we met the Italians – and we had no fighter escort of our own – I wasn’t quite sure what to expect. The planes of the Regia Aeronautica approached us, staying out of range and not coming any closer. I held my fire. They circled for a few minutes, but didn’t attack and didn’t make any overtly threatening moves. They were looking. The Italians then proceeded to put on a mid-air acrobatics show the likes of which I’d never seen. At first I thought they were trying to distract us so that another group of fighters could gain an element of surprise, but no, they were just showing off with impressive aerial dives and rolls. It was an excellent display of talent! Although it seemed to go on for a long time, it probably lasted less than five or six minutes. And then, as quickly as they had appeared, the Saettas turned and went home.

It was only a couple of weeks later, on 8 September 1943, that Italy pulled out of the war. I think those pilots might have known something that we didn’t.”