Anyone above the age of 40 should remember Max Headroom, the fictional British ad-pitchman (New Coke, anyone?) who was the world’s first computer-generated TV host. He was said to have been modeled after the insincere and egotistical media talking heads of the day, in particular the smarmy Ted Baxter role from The Mary Tyler Moore Show. His stuttering electronic cadence made his voice instantly recognizable to viewers worldwide. He was such a pop success that the year following his TV debut, he even appeared in a now-forgettable film feature, 20 Minutes Into The Future. 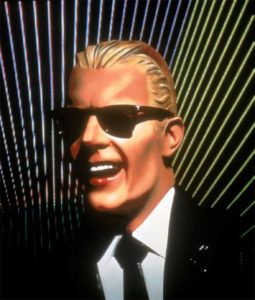 [sidebar: computer graphics were not very advanced in 1984 when he debuted, so the ‘cyber host’ was actually portrayed by an actor in prosthetic makeup, a fiberglass suit, Ray Bans, and hand drawn backdrops]

[sidebar: the character’s name came from the supposed last thing that his consciousness saw before the fatal car wreck that claimed his corporeal self: “Max. Headroom: 2.3 meters” suspended across a tunnel entrance]

Max, however, had greater fame awaiting him: his role in the first documented hack of the computer age.

At 9:14 p.m. on 22 November 1987, the regularly scheduled programming at Chicago’s WGN was interrupted, and instead appeared on the screen a person wearing a mask in front of a non-descript retro-futuristic looking metallic backdrop. He strongly resembled Max, coming to haunt from the dystopian future. It was brief and silent. WGN technicians quickly switched back to the local news. But two hours later, during a broadcast of Dr Who, cross-town WTTW-11 experienced an identical break in service. On came the same figure, but this time there was an audio feed of largely unintelligible cackling, some mumbled threats to Chuck Swirsky (an area sportscaster), and the hummed theme song of a well-known cartoon series. The masked figure then mooned the audience, and a mysterious woman appeared who was trying to smack an airborne insect with a flyswatter. This went on for 90 seconds before regularly scheduled service was resumed.

In 2010, a Reddit user by the handle of Bpoag provided some add’n information. He claimed to have been part of a phreaking cell operating in the Chicago suburb of LaGrange in the late 1980s (phreaking was the slang term used at the time for those who could manipulate telephone networks and the systems that depended on them… in other words, the precursors of today’s internet hackers). Bpoag claimed to have been warned by two other members of the group – named J and K – to watch the TV on the evening of 22 November “for something big.” He did, and immediately recognized the handiwork of his fellow phreakers.

According to Bpoag, the actual hack was simple enough to accomplish, and didn’t require any advanced technical equipment beyond what an avid phreaker would already have had in his arsenal. He opined, “all that had to be done was to provide a signal to the satellite dish that was of a greater power than the legitimate one.”

Bpoag likened the stunt to a public service announcement: “it only lasted as long as it needed to get the point across, that point being that the airwaves were woefully unprotected, and easily exploitable.”

The feds were not amused and launched an investigation. But after almost three decades, the actual identities of the hackers have never been determined. But they no doubt foretold what would later become, for pranksters, governments, protesters, activists, and terrorists alike, a global and likely permanent phenomenon.