Here’s a quiz: which of the following assertions were uttered by chronically mentally ill individuals at a state psychiatric facility, and which were headlines from a nationally distributed periodical, one that enjoyed a circulation of over 1.2M in its heyday and spawned a hit off-Broadway musical?

“Scientists have found an infant dragon preserved in formaldehyde!”

“Bat Boy to be the next Pope!”

“Elvis’ face appeared in my pancakes!”

“The Founding Fathers were all gay!”

While some/ all of this might have been said at some point by patients suffering from psychotic disorders, the above statements were actually front page ‘news’ from a widely read tabloid. The Weekly World News, bastard cousin of The National Enquirer, to be exact.

But allow me to digress for a moment before further explaining.

I was dining with family recently when my foreign-born spouse brought forth a surprise dish we’ve never before enjoyed at our house. Perhaps she thought it was an exotic food worth sharing, one that is absent from both her own memory and her culture’s traditional cuisine. She placed it on the table with a smile and asked, “does anyone know what this is?”

She looked somewhat surprised that I recognized the edible when she has never seen me eat or talk about it in our decade together. Thus, I felt an explanation to her was in order.

At the University of Virginia, where I completed both medical school and residency, the second half of the 1980s was a period of transition. The drab old hospital, built in the years following WWII, was being replaced by a bright white edifice just across the street. That new building, with an expensive copper roof that shone like jewelry in the sunlight, had a fancy dining facility in keeping with the rest of its aesthetics. The old hospital had a run-down cafeteria in its basement – called The Skylight Inn, even though that was comical since there wasn’t a single window in the place.

And the old hospital had the Pink Ladies.

Most hospitals have a volunteer auxiliary comprised of (usually female) older retired helpers supplemented by bored high-schoolers and those looking to add a few community service brownie points to their upcoming college applications. The former were the Pink Ladies, and the latter were the Candy Stripers.

Both flavors of these volunteers had small carts that they pushed around to patients’ rooms to deliver paperback novels and chocolate bars. But they also served the medical center’s workforce. The Pink Ladies staffed a snackbar, just one flight up from the Skylight Inn in the old hospital. Although its menu was limited – a few simple sandwiches, chips, sodas, candy – it was often preferred by the doctors and nurses to the cafeteria downstairs. Why? Because the Pink Ladies made their sandwiches early each morning en masse, wrapped them in wax paper, and sold them super-cheaply. Plus, you could be in-and-out with your purchase in no time; patronizing the Skylight Inn meant lining up and waiting, and if they didn’t have what you wanted, you’d have to wait longer.

Far from gourmet, Pink Lady sandwiches consisted of nothing more than two pieces of Wonder Bread cut diagonally, usually with some sort of smear on the triangles which were then pressed/ glued together. Tuna. Ham salad. And yes, pimento cheese.

As a medical student and intern, grabbing three or four Pink Lady sandwiches, for the princely sum of approx $2.50 total and then stuffing them, taped wax paper and all, into the huge side pockets of my white coat, could keep me going for the rest of the afternoon and evening, long after the Skylight Inn had closed and the Pink Ladies had gone home to play pinochle and watch Lawrence Welk.

So that was my experience with pimento cheese. But remembering that faux-delicacy soon got me thinking about another long-forgotten aspect of the Pink Ladies, one far more nefarious.

I spent my internship in the main (old) hospital, but as a resident, I moved out to the designated psychiatric facility, Blue Ridge, a freestanding separate complex that was originally a turn-of-the-century TB sanitarium on 100 acres about five miles down Rt 20. The Pink Ladies had an outlet there as well, but it wasn’t their foodstuffs in 1989 that piqued my curiosity.

It’s widely accepted that, when managing patients with disorders of perception and cognition, maintaining predictable routines in structured surroundings with known staff helps reinforce reality-testing. That’s why ward schedules are often the same every day, familiar faces are encouraged to visit, and rooms usually have large windows, bold calendars, seasonal décor, and clocks that are easy to read – it helps those with a tenuous grasp of this dimension keep from further slipping.

Those patients with off-unit privileges were allowed to leave the ward and walk outside to smoke, or else stroll down the hall to the Pink Ladies’ venue for a treat. 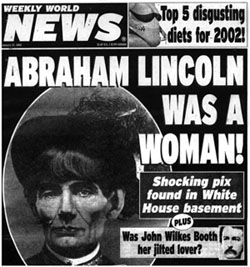 Imagine my amazement when, the first time I visited the Pink Ladies’ satellite at Blue Ridge, my eyes were greeted by issues of the Weekly World News trumpeting the exploits of P’lod (an extraterrestrial famed for his affair with the First Lady), Tonya (the world’s fattest cat at 80lbs) and old fallbacks such as Bigfoot and Nessie. All things supernatural and paranormal do not make the psychiatrist’s job any easier, trust me. Patients would see this drivel, and even if they didn’t purchase the rag, they would come back to afternoon group espousing further paranoid delusions and conspiratorial theories despite the epic amounts of Haldol that I dutifully dispensed.

Was this someone’s idea of a joke? Perhaps the lighthearted satire of WWN was amusing for medical-surgical patients at the main hospital, but at Blue Ridge?!?! It only rendered the task of preserving reality all the more difficult, Rx or no Rx.

I finished residency in 1992. Blue Ridge closed its doors in 1996. The Weekly World News folded in 2007 after a 28 year print-run (it now lives online). And if the Pink Ladies’ shop still exists in the main UVa hospital, I suspect that those sandwiches are much more expensive, and the only periodicals on the rack are Time and Newsweek.