I recently attended my first death café here in Raleigh. For those unfamiliar with the phenom, it apparently started as a social movement in Europe that has spread internationally. On one organizer’s website, it is explained as an opportunity to “drink tea, eat cake, and discuss death… [the] aim [being] to increase awareness of death to help people make the most of their finite lives.”

Before I go further, though, I want to explain what might not be immediately obvious about my blog’s usual thematic content.

I thought about this long and hard. I was tempted to write a post about love, just for her and to head off further such critiques. But my pen ranneth dry, and I can’t discern anything in the saccharine realm about which to write. Poets and thinkers far more accomplished than I have tried to tackle the subject of love, and I’m not certain that any of them has squarely hit the nail on the head – or that I could improve on the canon already composed.

I can come up with only three explanations for why I gravitate in my writings as I do.

1. Give the public what they want. Why do you think the sensationalism of yellow journalism in the 19th century was such a guilty pleasure? Why do you suppose public executions were so well-attended? Why is Inferno the best known and most read of Dante’s trilogy? This is not coincidental. Admit it or not, people find the lurid fascinating.

2. Talk about what you know. Recall that I’m a forensic and prison psychiatrist. Rarely do I encounter the romantic in my line of work.

3. Discuss that in which some consensus might actually be reached. Love is wholly subjective and in the eye of the beholder. For a professional chef, planning and cooking a dinner party for 20 could well be a labor of love. For me, it would be a living Hell. Love and attraction are many things to many people, and it spans the gamut. But most everyone can agree on the macabre, and with apologies to Justice Potter Stewart, “I know it when I see it.”

Anyway, back to the death café.

It was held at Raleigh’s Oakwood Cemetery, arguably the most historic of this area’s burial grounds, and the final resting place of Tarheel governors and politicians, local celebrities, and numerous Confederate fallen. The cemetery’s mausoleum was the meeting site, and after winding through twisting narrow roads, passing old stones and fresh burials, I came across the marble-faced building with many cars parked around it. Going inside, there were probably 30 people sitting in folding chairs. I was greeted by a cemetery employee and volunteers from the county’s hospice service and gestured to a seat.

Being held in a cemetery, I feared the possibility of a commercial bent to the presentation. But this was not the case. Nor were religion and faith-based issues discussed specifically. There wasn’t really even an agenda. The larger audience was divided into four break-out groups, each lead by a volunteer. Mine was led by a hospice pastor. By this point I was really curious how it would proceed.

Those in attendance were a varied lot. All of the others in my break-out group were female. Some were still grieving recent losses, and crying. Some admitted to pondering an impending loss. Some were contemplating their own ends and how to make plans. I felt almost voyeuristic, since I wasn’t dealing with loss or grief, but was, more than anything, curious about who would show up and how the discussions would proceed.

Before the coffee break – this was a café, remember? – the talk revolved around words. Participants were asked to write down the three words that came to mind when they thought of death. Then they were asked to write down words describing how they’d want to be remembered after their own passings. As with almost all group processes with which I’ve been involved, people were reluctant to speak at first, but slowly the kindly facilitator drew out thoughts, and then the conversation flowed more freely. Fears. Hopes. Uncertainties. A few lighthearted moments (a memorial candle unexpectedly blowing out after someone remarked that ‘life can be cut short’ elicited nervous laughter).

The group then broke for refreshments, standing around to eat and drink next to the columbarium. The cake served was – what else? – Death by Chocolate, complete with little sugar grave markers with RIPs on them . I sampled the cake but slipped out before the second half of the group session convened. I didn’t think my clinical and decidedly non-spiritual approach to the whole thing meshed well with those still actively grieving, and I no longer wished to perceive myself as an intruder. 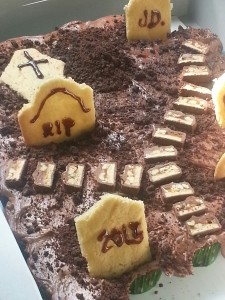 Death by Chocolate at the Raleigh Death Cafe

The Civil War marked a sea change in this country regarding how we collectively deal with death. Suddenly there were large numbers of people dying far from home, and there had to be logistics in place for preserving and transporting those remains back to waiting families. Before long the commercial Death Industry had arisen, and for better or worse, no longer did families care for their own. Slowly but inexorably the task of dealing with the dead fell to professionals, and then even the discussion of that inevitability fell more secretive and hushed in tone and volume – the proverbial 800lb gorilla of which no one wants to speak.

I’ve had a will since I was in college, long before I had an estate or dependents. It appealed to my Type-A temperament. But many of my (professional) friends who will even discuss the subject admit that they do not have wills or even advanced healthcare directives. And let’s face it: while not a jolly topic, how much better to address these concerns when feeling balanced, and not when possibly in the midst of an unexpected and sudden emotional crisis? I don’t consider myself a fragile sort, but as I had done research on available options long before they were needed, at the time of my own father’s passing in 2002, the hard decisions had already been finalized. That preparatory work made the process as easy as it could possibly have been.

So, no, dear friend, this post isn’t about love. It’s about death. I’m glad I went to hear the discourse, and I am delighted that such discussions are taking place in the open. Even rainbows and unicorns fade at some point.

2 thoughts on “The Death Cafe”