At the turn of the 20th century, the richest copper mine in the United States – later one of the top five in the world – was located in Cochise County of what would become the state of Arizona. Situated only a few miles north of the Mexican border in the crossroads of Bisbee, the name of the mine was the Copper Queen.

In the 1870s, cavalry detachments from Fort Huachuca had regularly bivouacked in the area where Bisbee would be founded while pursuing Apaches. On more than one occasion, the soldiers noticed interesting looking rocks on the ground. An officer showed these rocks to an old prospector, one George Warren, and the two decided to become partners in staking a mining claim as soon as the officer left federal service. Delay proved unfortunate for the officer, as Warren quickly realized the potential wealth of the site – the rocks were rich in the mineral cerussite, often found with silver deposits. Warren decided in 1877 to stake a claim by himself and forget his erstwhile partner. Three years later, a local entrepreneur named Ed Reilly acquired an option on the site from Warren for an undisclosed sum; Reilly began to raise capital to commence production.

Within thirty six months, all of the surface mineral deposits were depleted, but in the process the site crew had noticed something very unusual about the ore. Mines of that era could run profitably on orebody that ran as little as 3% copper (since silver and gold were also byproducts). The orebody on the stake that was to become the Copper Queen was over 23% copper, an extraordinary, and many said unrivaled, grade. The miners started to dig deeper beneath the Mule Mountains and found even larger orebodies of equal quality. By 1884, only four years after industrial-scale mining had commenced, the now-named Copper Queen was advertised for sale at a record asking price of more than $500,000. It was acquired by Phelps Dodge, a huge industrial conglomerate based in Arizona but with major international operations as well.

Organized as the Copper Queen Consolidated Mining Company (CQCM), the subsidiary became the dominant player in mining – as well as labor unrest and wildcat strikes – in southern Arizona for decades. Bisbee’s population rose into the thousands, and by the turn of the century, CQCM was the area’s largest employer, and also owned the biggest hotel in town, the only hospital and mercantile exchange, and the Bisbee Daily Review. CQCM also enforced its own brand of draconian rules on workers – intrusive physical exams to prevent theft, operating dangerous equipment while short-staffed, and even permitting for blasting to take place while men were uncomfortably close to explosions inside the mine.

Keep in mind that while the frontier wasn’t perhaps as wild then as it had been a generation before, the population was still sparse in much of the territories in 1900. Banditry and Indians were not uncommon; the last stagecoach robbery in the West occurred as recently as 1916. Transportation and communication were difficult, territorial law enforcement was scattered, and revolution brewed just across the southern border. Given the value of the ore at the mine, the payroll of the workers, and the need to transport both ore and payroll across swaths of emptiness, CQCM raised its own security detail. These armed men – I’m not certain if they were officially deputized or not – protected and kept order on the property. They also escorted convoys both to and from the mine along a spur of the El Paso & Southwestern, which connected with main lines of both the Southern Pacific and AT&SF Railroads at Fairbank, 30 miles to the north. Later, these same men – some would say thugs – enforced strike breaking and at least one mass deportation of Mexican and native American laborers and their (Caucasian) union agitators. 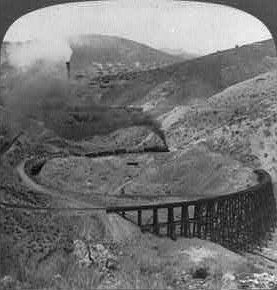 Although the date of the first company purchase isn’t known, CQCM executives authorized that weapons be ordered from Colt Manufacturing in Connecticut and shipped to Bisbee to arm the security detail. Luckily, Colt still has extensive records of sales going back to the mid-19th century, and the provenance of many a surviving revolver can easily be traced through serial number. 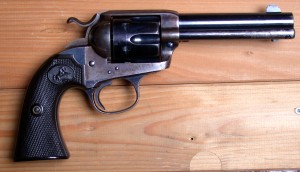 Many years ago, I found this revolver, a .38-40 Bisley Colt ‘Peacemaker’ with its original leather holster, during one of my trips west. It is a solid and presentable example of a period gun in its own right. But only recently did a search of the Colt archives reveal tantalizing further details. This Bisley was originally part of a shipment of ten guns for the mine’s security detail – “deliver FOB CQCM, Bisbee, Territory of Arizona, US of A” read the invoice – on 28 April 1903. Butch Cassidy’s Wild Bunch had been robbing trains in nearby New Mexico as recently as four years earlier! ‘1903’ was almost a decade before Arizona would even be admitted to the Union as a state.

Unless one finds a revolver carried by Doc Holliday, or something issued to the U.S. 7th Cavalry, this Bisley Colt is as classic an ‘Old West’ gun as one will find. If only it could speak.