When one hears ‘Civil War’ and ‘captured Confederate flag,’ images of Little Round Top, the Devil’s Den, and the Bloody Angle immediately come to mind – heroic struggles against seemingly impossible odds to seize a war trophy in the face of near-certain death. 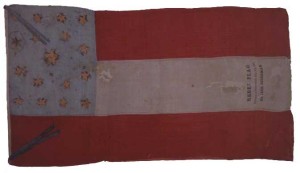 Behold the Biderman flag, the only Confederate flag captured during the Civil War in California. Its history is a bit more, er, prosaic.

California did not secede from the Union in 1861, though there were areas of strong Confederate sympathies. California’s involvement in the struggle consisted mainly of shipping gold to the East, providing recruits to local militias, and sending volunteers to join established regiments fighting in the middle Atlantic and trans-Mississippi. California Unionists had their hands full manning federal forts in the area, controlling restless natives, keeping the Arizona and New Mexico territories from joining the South, and suppressing the attempts of southern California to secede from the rest of the state.

On 4 July 1861 – less than three months after the firing on Ft Sumter, and less than three weeks before the clash at Bull Run – Major J.P. Gillis of the California State Militia decided to celebrate not only America’s independence from Great Britain, but also that of the Southern U.S. of A from the Northern half.

At 10 p.m. that evening, after fireworks had ended in a park in Sacramento, Gillis unfurled his silk Confederate flag, which he had hidden until then by wrapping it around his walking stick. He marched along the boardwalk in front of the St George Hotel at the corner of 4th and J streets displaying the flag. Most in the crowd appeared pleased according to eyewitness accounts.

But not all. J.W. Biderman and Curtis Clark, two Unionist locals, were incensed. They followed Gillis, and then without warning, jumped him and proceeded to pummel and strangle him. Then, as he cries for help went unheeded, Biderman punched him in the face and tore the flag from the improvised flagpole/ walking stick.

Later, Biderman and Clark held court at the St George, ‘inviting’ any interested secessionists to come and take the flag back from them. No one attempted.

Confederate flags usually came in 7-, 11-, and 13-star variants. There were a few made with 15-stars, reflecting the wishful thinking of the creators regarding border states joining the struggle. The Biderman flag is sui generis in that it has 17-stars, apparently reflecting his unrealized desire for California and the western territories to cast their lots with the South as well.

And honestly, as a thief can never transfer legal title, the flag should probably be known as the Gillis flag.