[Today’s post is sponsored by our very own Audrey E. Alford – welcome back to state government!]

Georgina Weldon (1837 – 1914) was an accomplished British soprano of the 19th century. Classically trained in Florence, she ran afoul of her rich father by going against his wishes regarding marriage. Unfortunately, her new husband was no more supportive of his bride than was her father, and the former then forbade Georgina to appear professionally on stage. Disinherited from wealth and prohibited from earning by her own skills, Georgina was relegated to the occasional performance, gratis, for local charities. 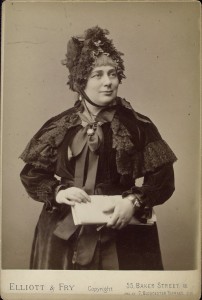 Before long, Georgina and her husband divorced so that he could cohabit with his mistress. Harry Weldon then reneged on his alimony agreement, and Georgina promptly sued – a rarity for a woman in 19th century Britain. Harry immediately tried to have Georgina declared insane and committed to an asylum (freeing him from alimony). On flimsy testimony the court agreed with Harry, and the order was signed. Georgina caught wind of this and hid until the warrant for her commitment had expired. She then immediately filed suit against Harry and his confederates for attempted assault on her person.

Thus started Georgina’s second career as a repeat and oft-annoying litigant. Sometimes she was successful, but many times she was not – once even spending time in jail when convicted in countersuit of libel. There was a time in the 1870s when she had 17 concurrent lawsuits pending against a series of defendants for a variety of slights, real and perceived. However, by then unshackled of her husband, she started singing professionally to finance her legal ‘habit.’ She also found time, in 1882, to publish The Outpourings of an Alleged Lunatic, or How I Escaped the Mad Doctors.

While not an official member, Georgina Weldon’s efforts coincided chronologically and conceptually with those of the interestingly-named Alleged Lunatics’ Friends Society. The ALFS had been founded in 1845 in London to address what its members saw as abuses in then-enforced British commitment laws. Miscarriages of justice were rampant, especially since doctors at the time relied on subjective hearsay from biased sources when testifying at commitment hearings. They often equated benign eccentricities and perceived immoralities as insanity per se – keep in mind that private for-profit madhouses then still existed, and there were profits to be made as well.

The commitment laws were used to muffle those who were odd at best and socially irritating at worst. “Uppity” women were often targets of the commitment laws, as in Georgina’s case; those foolishly contesting inheritances against powerful and well-placed relatives were often another targeted group.

In a particularly egregious case litigated (successfully) by the ALFS, one Jane Bright, a member of the wealthy Brights of Skeffington Hall in Leicestershire, had been seduced by her physician, who took most of her money and left her pregnant. Soon after the birth of her bastard child, Jane’s brothers had her committed to Northampton Asylum to get her out of the way. On her eventual release, she enlisted Gilbert Bolden, the ALFS’ solicitor, to help her recover the remains of her fortune from her family.

Sadly, Georgina Weldon’s operatic career flagged, and she became known more as an eccentric than as a crusader for women’s and patients’ rights. And the ALFS eventually went defunct, having failed to garner much public support. However, to the Society’s credit and Georgina’s legacy, both were successful in initially drawing attention to widespread abuses in the mental health system of the 19th century United Kingdom. They were amongst the first and most vocal advocates dedicated to greater protection against wrongful confinement in the Western world.