There he was, smiling at us!

I realize that’s an anthropomorphic attribution to an inanimate chunk of calcium no longer alive, but a skull does appear to smile, even when dirty, fractured, and missing most of its mandible.

My stepdaughter and I were peering into a cracked mausoleum, and there on the dirt floor, amidst the detritus of a century of rotting wood coffins and other accumulated debris, he sat and ‘looked’ in our direction. We tried to get a picture, but the light didn’t cooperate. How very macabre. 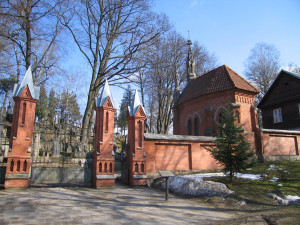 We were in Rasos Cemetery, which is the oldest municipal burial ground in Vilnius, Lithuania. There were burials on the site as early as 1769, but the 11 hectare Roman Catholic property was not formally consecrated until 1801, which is therefore its official date of founding. Two days after consecration, the late Mayor of Vilnius, one Jan Muller, was interred there, and it’s been a busy place ever since. It’s now filled with neo-Gothic tombs, fragments of columbaria, mausoleums, chapels, bell towers, and memorials, all packed together on the hills and in the ravines with little apparent order. Having run out of space long ago despite the crowding, Rasos has been closed to new burials – except those in preexisting family plots – since 1990.

The boneyard is filled with notables from Lithuanian and Polish history. There are politicians, generals, academics, artists, and writers at every turn. Two of the men who signed the Lithuanian Articles of Independence rest there. Arguably the most famous remains are those of Mikalojus Čiurlionis (1875-1911), the renowned abstract composer, painter, and poet.

Rasos is situated on very hilly land. Lithuania gets a lot of rain. Hills + Rain = Erosion. Thus, almost all of the graves in Rasos are tilted, lopsided, or in some cases have toppled over altogether – hence the cracks in many of the mausoleums, and our ability to spy at least one of the inhabitants. We were accordingly not surprised to learn that an old ossuary had gone over a precipice and shattered at the bottom a number of years ago, scattering bones along the ground. 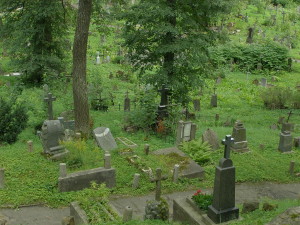 Geology aside, though, Rasos has another problem. Prior to the end of WWI, both Lithuania and nearby Poland were under the firm grip of the Tsar. Vilnius at that time had a majority of Polish-speaking residents. After the Bolsheviks came to power in Russia, Lithuania and Poland regained independence, and immediately came to blows over the possession of Vilnius. The Poles seized the city from 1922 to the late 1930s, after which Lithuania again took control under the aegis of the Soviet occupation; Vilnius has remained the Lithuanian capital ever since.

But that period of control by Warsaw resulted in a lot of Polish graves in Rasos. And memories die hard.

The heart of the general who orchestrated Poland’s initial seizure of Vilnius, Marshal Józef Piłsudski, lies enshrined near the cemetery’s entrance along with almost 200 of his soldiers (including three members of the previously permanent honor guard who were summarily shot when the Soviets took over). Polish flags abound in that section of Rasos. And while the Marshal’s tomb appears untouched, a number of the soldiers’ stones have been desecrated.

When asked, our guide said that the damage to the markers resulted from WWII. But this is not accurate. The plaza wherein is buried Pilsudski and his guards was restored by the Polish government in 1993 with the permission of the Lithuanian authorities. Which makes the damage recent.

I don’t recall now if our smiling skull was Polish or Lithuanian. But it is worth noting that the dead seem to get along just fine in the quiet decay of the old cemetery. It’s the living about whom I’m concerned.

One thought on “Rasos Cemetery”