[Today’s post is sponsored by my good friends, Monika Vainoriene MD, and Enrikas Vainorius, MD, of Morrisville, NC. We were talking about this very subject recently, and now here is a bit more detail…]

Though likely apocryphal, there’s a story told by psychiatrists over drinks at happy hour that goes something like this: years ago, an employee of a mental asylum in Johannesburg, South Africa, was transporting twenty patients in a bus from one psychiatric facility to another. He stopped (on company time) for a few drinks while en route, and when he got back to the bus, all of the patients had eloped. Fearing for his job and not wanting to admit to his incompetence, the driver proceeded to a nearby bus stop in town and offered everyone waiting there a free ride. He then delivered these unsuspecting passengers to the second asylum, telling the receiving staff that the ‘patients’ were very excitable and prone to bizarre delusions of abduction. The deception wasn’t discovered for almost a week.

It’s long been a joke amongst psychiatrists that if a healthy person were ever committed to a psychiatric facility, they might have a difficult time getting out, since those predictable statements that they’d make – “I’m not crazy!” – are the same utterances that the truly disturbed would say.

Well, we know of at least one situation where this did, in fact, happen.

Elizabeth Jane Cochran was born in 1864 near Pittsburgh PA. She was one of fifteen children, and was always known as the rebellious one. This made her stand out during an age in which women were meant to be seen and not heard.

Her father died when she was 6 years old, and the family was thrown into poverty. By the age of 14, Elizabeth was having to work outside the home to help support the family. She held brief gigs as a schoolteacher and a maid in a boardinghouse, but nothing seemed too permanent.

Around this time, she read an op-ed piece in the Pittsburgh daily newspaper by one Erasmus Wilson, then a well-known journalist. He wrote that working women were “an abomination,” and should be home, pregnant and tending to their husbands. This annoyed Elizabeth, who knew that many working women – she and her mother amongst them – had no such option. So Elizabeth replied to Wilson with a strongly worded letter about the offensive article. The newspaper loved her chutzpah, and subsequently hired her as a writer and giving her the pen name Nellie Bly.

Elizabeth/ Nellie started writing about the plight facing working women, but the newspaper decided she should be writing about fashion and home economics. Nellie wasn’t interested in that, so she quit and headed to New York. Luckily, her reputation by then proceeded her, and it wasn’t long before she was hired by the New York World. They had a plan for Nellie. On 22 September 1887, Nellie was approached by her new editor to write an article about the state’s notorious Blackwell Island Insane Asylum. They wanted to know what went on behind the barred doors, and Nellie agreed to find out. The editor offered no solid plan to get her out of the institution once her observations were completed, but promised her it would be achieved somehow. Her instructions were simple: “Write up things as you find them, good or bad; give praise and blame as you think best, and tell the truth all the time.”

But first, Nellie had to get herself committed, which meant she had to feign insanity convincingly. She decided to pose as a poor girl looking for work at the city’s Temporary Home for Females, under the name Nellie Brown. There, she started displaying ‘insane’ behaviour. She said she was afraid of the other women, spoke vaguely, and spent that first night staring blankly at a wall rather than sleeping. She reported having nightmares of attacking people with a knife.

The plan worked. The ass’t matron called the police and Nellie was hauled away. The next morning, a Judge Duffy ordered a mental examination, and the court’s alienist declared her insane. A second specialist concurred, adding, “[the patient is] positively demented. I consider it a hopeless case. She needs to be put where someone will take care of her.”

Nellie’s first observation: it’s not very difficult to fake mental illness and get admitted to an asylum.

Once at the asylum, Nellie met a number of other women who didn’t seem to have anything wrong with them either. She watched as those women were brought before doctors for follow-up examinations. One woman only had a fever as far as Nellie could tell. Another was German, and as no one at the asylum spoke her language, the staff thought the woman must be crazy. When it was Nellie’s turn, she decided to drop the charade and act/ talk as she did in everyday life; however, the doctor ignored her comments and kept flirting with the nurse instead. Nellie noted that, “the more sanely I talked and acted, the crazier I was thought to be.”

Nellie determined quickly that the food was horrible and sleeping arrangements were chilly and uncomfortable. Asylum life, Nellie soon found, was unsuitable for anyone. She was forced to endure ice-cold baths, freezing nights, both verbal and physical abuse at the hands of the nurses, isolation, and the fear of fire (doors were individually locked from the outside, and windows were barred, so if a fire broke out, it was likely that a majority of the patients would die.) “What, excepting torture, would produce insanity quicker than this treatment? Take a perfectly sane and healthy woman, shut her up and make her sit from 6 a.m. to 8 p.m. on straight-back benches, do not allow her to talk or move during these hours, give her no reading and let her know nothing of the world or its doings, give her bad food and harsh treatment, and see how long it will take to make her insane. Two months [of that] would make her a mental and physical wreck.”

Towards the end of her stay, Nellie pressed the doctors for answers. How could they determine whether or not the women were insane if they didn’t listen to them? She insisted on a full examination to determine her sanity, but the doctors only brushed her aside, thinking she was raving. She wrote that “the insane asylum on Blackwell’s Island is a human rat-trap. It is easy to get in, but once there it is impossible to leave.”

Luckily for the intrepid reporter, her editor made good on his promise to get her out. After ten days in the asylum, she was freed and on her way back to the newspaper’s offices (details of her release remain sketchy). The first installment of Nellie’s report on the conditions in the asylum was published a few days later; the entire expose ran over 17 issues (and was later compiled into a book, Ten Days In A Mad House). Readers were horrified, and Nellie Bly was made a celebrity of sorts, praised for her bravery during her time in the asylum. 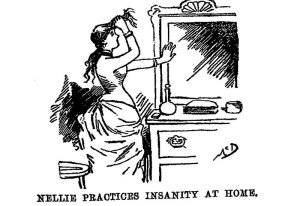 an illustration from Nellie Bly’s book

Predictably, the medical staff offered many excuses for the allegations in Nellie’s articles. But the public was outraged. Nellie’s writings produced many changes and better treatment for those institutionalized, including more funding for the Department of Public Charities and Corrections. One involuntary patient later wrote, “ever since [Nellie left], everything is different. The nurses are very kind and we are given plenty to wear. The doctors come to see us often and the food is greatly improved.”

Interestingly, her asylum stint wasn’t the last of Nellie’s adventures. She later traveled solo around the world in 72 days, a much bigger deal for a woman in the late 19th century than it would be today, trying to ‘beat’ other reporters and the 80-day mark set by the Jules Verne novel of the same name. Not only did she succeed in her global circumnavigation, but she actually was able to meet Verne in Paris while passing through town!