[the Alienist is still on sabbatical, but this essay, originally from the year before last, is one of his better ones]

I met a traveler from an antique land
who said: “Two vast and trunkless legs of stone
stand in the desert. Near them, on the sand,
half sunk, a shattered visage lies, whose frown
and wrinkled lip, and sneer of cold command,
tell that its sculptor well those passions read.
Which yet survive, stamped on these lifeless things,
the hand that mocked them and the heart that fed.
And on the pedestal these words appear:
‘My name is Ozymandias, king of kings!
Look on my works, ye mighty, and despair!'”
Nothing beside remains. Round the decay
of that colossal wreck, boundless and bare
the lone and level sands stretch far away.
~Shelley

Once the ubiquitous symbol of the Communist World, Vladimir Ilyich Ulyanov, a.k.a. Lenin, has had a rough time of late. Certainly there remain places where he is still revered, at least officially – parts of Russia proper along with some former Soviet republics and satellites (e.g., Belarus, Cuba, Tajikistan) and a few far eastern workers’ paradises (e.g., Vietnam). But for the most part, the political system he championed has wound up in the dustbin of history.

Into that same dustbin went a lot of likenesses of Lenin and his cronies, torn down in frenzy, left and right, as the Iron Curtain crumbled. 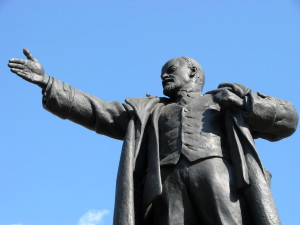 I fully understand the passions that symbols evoke, but as a historian, I hate to see ‘history’ destroyed. Better to put these images in collections for the benefit of future generations to learn about the Second World than to annihilate them as scrap metal.

Some of those fallen did find their ways to new leases on life.

Both England and the Netherlands have museums with statues of the USSR on display.

The Ukrainians tossed Soviet era ‘stuff’ into a lake near Tarhankut, and now divers can see Lenin and all of his friends in the underwater divers’ playground.

Those sculptures which have been saved are not all in museums or underwater parks, though. There is a gigantic Soviet-era image of The Man in Seattle. Delhi has a large icon downtown, as do Kotka, Finland; Vittsjo, Sweden; Quebec City; Bilbao, Spain; and both Cavriago and the Isle of Capri in Italy. Imposing visages of Lenin are displayed outside the Communist Party headquarters in both Athens, Greece, and Montpelier, France.

There’s a large Lenin simulacrum on a rooftop in Manhattan (while photos of it are widely available on Google, I can’t locate the address).

There’s his bust on the roof of the old Soviet Antarctic station, with snowdrifts now up to the chin.

His metal representation is located at both the Tropicana Casino in Atlantic City and the Mandalay Bay Casino in Las Vegas – the latter being headless because the cranium is kept inside the walk-in freezer of the vodka bar.

But even if you firmly adhere to P.T Barnum’s old saw that there is no such thing as bad publicity, the alloy Comrade Ulyanov located at the entrance to the Kremlin will test your resolve. Not that Kremlin… this is the famous gay bar of the same name in Belfast, Northern Ireland, which regularly dresses their bronze doorman in all manner of drag for special occasions.

On my last visit East, it was Lithuania’s treatment of Lenin that I wanted to see. Near the resort spa town of Druskininkai there exists a rural landscape that has been converted into a wonderland of rejected political detritus. Grutas Park, unofficially known as Stalin’s World, is an open-air repository of relics of the USSR. After Lithuania regained its independence in 1990, most things Soviet were taken down and dumped. Entrepreneur Viliumas Malinauskas saw an opportunity, though, and purchased these relics, for what was probably a pittance, with full government approval. I suspect that transporting the artworks – many of which weigh tons – was the most expensive part of the project. The Soviet-theme park was thus created in the wetlands of the Dzūkija National Forest, and is an easy day trip from the capital, Vilnius.

You arrive, find a spot for the car, and walk past some pastures leading to the ticket booth. Suddenly you’re transported into a gulag-esque environment. There are wooden-plank and concrete pathways winding through the forested landscape, and periodically you stumble across barbed wire fences and old guard towers on which are mounted 1950s-vintage loudspeakers playing propaganda and revolutionary music. Interspersed along the paths there are almost 90 busts, monuments, and larger-than-life-sized effigies of the pantheon of Soviet civilization: Lenin, Stalin, Beria, Marx, Engels, Kapsukas, Dzerzhinsky… the gang’s all here.

Uncle Joe at his namesake park

[another sidebar: what was particularly funny is that the missus recognized many of these works from her young adulthood, exclaiming in surprise more than once, “oh, I wondered where that statue went…”]

Stalin’s World has not been without controversy, however, and some ideas originally meant to be part of the visitors’ experience were never allowed. One example was the proposal to have transported visitors from their vehicles in a Gulag-style train, since period locomotives and boxcars are on-site but not functioning. Perhaps that idea was a bit too fraught with realism?

Founder Malinauskas won the 2001 IgNobel Prize for his brainchild. But then the capitalist lawyers moved in; since January 2007 the enclave has been in dispute with the Lithuanian copyright protection agency because seven of the (now ancient) surviving artists – or their heirs or estates – are claiming that Stalin’s World is in violation of their intellectual property rights by displaying works without expressed permission.

Keep in mind that Lenin was, himself, a lawyer.

Grutas Park, though, is a finite space, and there were an awful lot of iron dictators out there. What to do with the inevitable excess? Are they all destined for the melting pot?

Fear not! Though they deny it, North Korea’s attempts to earn foreign currency have included exporting excess statues of Kim Jong Il, minus the heads. Apparently, there’s a market for such glut in Africa; those skilled in socialist artistry (on loan from Mansudae Studio and the University of Fine Arts, both of Pyongyang) weld the cranial likenesses of local despots onto the necks of suspiciously-Korean looking metal bodies to give them new (local) life. For example, in the middle of a traffic circle in Kinshasa, Congo, is a 25’ statute of a dour-looking Laurent Kabila, that country’s former strongman. With his finger raised to the sky, a small book grasped in his left hand, and dressed in pleated military slacks and a buttoned-up jacket, the corpus has a decidedly juche look to it. On top, though, is a bald and grumpy-appearing Kabila noggin, perhaps ever so slightly out of proportion.

[note to potential sub-Saharan heads of state: it seems that Korean artisans have had difficulty making realistic looking African features on the heads and faces of these regifted statues, resulting in the need for corrective weldings on more than one occasion. But you get what you pay for…]

Finally, let’s not forget Ronald McDonald’s statue in all of its neo-Socialist glory, beckoning to the horizon, outside his namesake eatery on Wangfujing Street in Beijing. That particular Mickey-D’s is just a hop-skip-jump from Mao’s own mausoleum and the Forbidden City walls.

No joke. There’s a commie-looking hamburger clown in the Chinese capital. And the last time I checked, Comade Ronald was still there, looking toward the very bright future.

Is there any doubt who won the Cold War?