It’s late October. You will be encountering witches with broomsticks and bubbling cauldrons before long. For that reason, you should be aware of what it is that you are actually seeing. There is much more to this (sordid) story than the sanitized Disney-esque version currently fed by modern commercialism.

Old hags travel on broomsticks because they look aerodynamic, can function as seating, and are symbols of innocuous female domesticity gone very bad. As for those cauldrons, they’re filled with some non-specific brew that contains eye-of-newt and toe-of-frog, plus a pinch of black magic that is never clearly delineated.

Oh that it were that simple.

Historically, witches have been perceived by society in two (usually female) forms: those hooked-nose warted old hags of whom we’ve spoken – think Shakespeare’s MacBeth and the tales of the Brothers Grimm – but also as attractive temptresses, the vixen mistresses of Beelzebub himself. As recently as WWI, common Halloween postcards showed many witches as beautiful Gibson Girl sorceresses with blushed cheeks and ample curves.

Over time, though – thanks in large part to puritanical American mores – the laughably ugly caricature became the preeminent version in the Western public’s eye.

In distant epochs, at just about any point on life’s continuum, strong-willed women who were feared or disliked by the locals for whatever reason could arguably fall into either one of the two broad witch categories. Bummer.

In his seminal work, Discovery of Witchcraft (1584), self-declared expert Reginald Scot claimed that women were particularly at risk of becoming pawns of Mephistopheles “upon the stopping of their monthly… issue of blood.” Apparently post-menopause allowed black bile to accumulate and melancholy to take root, the Devil’s favorite cocktail. In add’n to this dangerous chemical shift, the physical changes that a woman might expect after menopause, such as osteoporosis causing a ‘dowager’s hump,’ tooth loss, and the growth of facial hair, produce those oft-recognized stereotypical characteristics of the old hag witch.

As for the hotties? Forget the black bile… the other way in which women were ‘turned’ by Satan was through sexual intercourse, a more likely trap for the young and fertile than the wizened. Much early artwork depicting witches, titillating by olden standards, shows them frolicking in the nude. For example, check out the paintings of Spanish artist Luis Ricardo Falero (d. 1896), some of which are in the Metropolitan Museum in New York City – he mirrored the era’s beliefs by painting his witches as voluptuous and alluring. 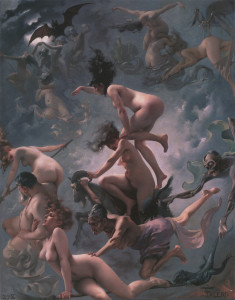 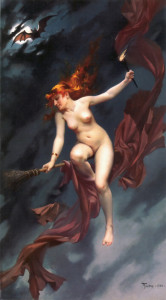 Now what of those broomsticks?

One of the earliest references to flying on a broomstick was through the (admittedly torture-induced) confessions of a suspected male witch, Guillaume Edelin, of Saint-Germain-en-Laye near Paris, in 1453.

Edelin confessed to flying on broomsticks, and even mentioned watching his “aged mother straddle a broomstick and whisk up the chimney and out of the house.”

This isn’t necessarily fabrication, fantasy, or the occult. There is a very real postulated connection between witches and broomsticks, though to understand it, we need to know more about the ubiquitous cauldrons, and what it was exactly that was brewing inside.

The use of hallucinogenic plants and fungi by shamans goes back to humankind’s pre-history. In Europe, such flora grew and was widely available – wolfsbane (Arnica montana), jimsonweed (Datura stramonium), hemlock (Conium maculatum), henbane (Hyoscyamus niger), nightshade (Atropa belladonna), and mandrake (Mandragora officinarum) all come to mind.

And there was rye, the primary grain from which bread was then made. Susceptible to a fungal disease known as ergot (Claviceps purpurea), European rye was so commonly tainted with it that until the 1850s, people thought that the purple ergot that grew on rye was actually a part of the plant.

Ergot contains a number of hallucinogens. And it seems that not everyone who experienced ergot poisoning minded the experience; in fact many sought these LSD-like substances in order to induce deep sleep as well as altered consciousness.

But as with LSD, these agents can alter the perception of reality in small doses… and kill in larger amounts.

Johann Weyer, in his encyclopedic Praestigiis Daemonum (1563) opined that it was these very ingredients that were found in witches’ “flying ointments.”

You see, drinking a potion containing toxins could prove fatal rather quickly. Those practicing the Dark Arts, or more often those free spirits merely curious, learned that making a paste of psychoactive ingredients suspended in animal fat, and then applying it carefully to one’s mucous membranes – ideally through the rectum or vagina – allowed for careful titration and less risk of overdose. One could then more safely experience the resulting hallucinogenic trip and ‘take flight.’

Some well-respected members of society (read: men, non-witches) were also investigating the properties of these lotions and potions. One such inquisitor was Andres de Laguna, the early 16th century court physician to Pope Julius III. He became interested in an unusual substance taken from the home of a woman accused of witchcraft. He tested it on another woman with the following result: “No sooner did I anoint her than she opened her eyes wide like a rabbit, and soon they looked like those of a cooked hare when she fell into such a profound sleep that I thought I should never be able to awake her…. However, after the lapse of thirty-six hours, I restored her to her senses and sanity.” His notes reveal that the substance was composed of “soporific herbs such as hemlock, nightshade, henbane, and mandrake.” Germanely to our discussion, the test subject was not at all pleased about being woken up. She reportedly said to de Laguna, “why did you awaken me? Badness to you! And at such an inauspicious moment [just as] I was surrounded by all the delights in the world.”

But how did de Laguna anoint the subject? How might “flying ointments” best be applied to delicate areas? And why the association with broomsticks, which would be a bit, er, unwieldy?

One explanation is that plants used in these preparations would have been gathered and stored in bound bundles known as whisks. The whisks may have been boiled whole in large kettles, releasing their active ingredients into the broth and soaking the wrapped handles of the whisks in the process. A witch’s later application to her body of the (phallic) handle, known as a stick, staff, or broom, and now coated in psychoactive oil, would have done the trick quite nicely. And over time, illustrations of witches’ accessories showed an evolution from the original hand-held whisk to the full floor-sweeping broom.

Those early nude depictions of witches? Several exist that illustrate nubile young females rubbing their genitals with something from a small pot as they “prepare to fly.”

• From the court investigation of the accused Scottish witch Alice Kyteler in 1324: “in rifleing the closet of the ladie was found a pipe of ointment wherewith she greased a staffe upon which she then ambled and galloped.”

• From the writings of the Frenchman Jordanes de Bergamo in the early 15th century: “witches confess that on certain nights they anoint a staff and ride on it to the appointed place, or they anoint themselves in… hairy places” (use your imagination).

• In 1477, one Antoine Rose under torture confessed that “[the Devil] put his mark on [me], on the little finger of the left hand, and gave [me] a stick… and a pot of ointment” whereby she smeared the ointment on the stick, put it between her legs, and exclaimed, “Go, in the name of the Devil, Go!”

• An account by Giovanni Della Porta in the 16th century affirmed that the application of the salve by one woman had the result that she claimed that “she had passed over both seas and mountains.”

• Herr Weyer noted that once these ointments were applied to the genitals, it produced “a sensation of rising into the air and flying.”

In 1966, modern researcher Gustav Schenk applied such a suspension under his arms and described the subsequent sensation: “Each part of my body seemed to be going off on its own, and I was seized with the fear that I was falling. At the same time I experienced an intoxicating sensation of flying…. I soared while my hallucinations — the clouds, the lowering sky, herds of beasts, falling leaves, billowing streamers of steam and rivers of molten metal — were swirling below.”

Through the prism of modern sensibilities, such self pleasuring is not nearly as shocking to some as it would have proven to an ostensibly devout Christian audience of centuries ago. Then, that a woman would dare to engage in such liberties with her own body and mind would be nothing short of the Work of the Devil. No doubt there were women who were tortured and killed because they dared to push such boundaries.

But luckily this witchy review ends on a positive note. Our 15th century accused, Antoine Rose, escaped execution, vanishing mysteriously from her holding cell after her torture and conviction.