[Today’s post is sponsored by Lisa Kamarchik, JD, an accomplished family lawyer in Raleigh, North Carolina. When asked about her own coffee preferences a while back, she said something to the effect of “I like good coffee, not that [expletive] you get from [insert local grocery chain here].” So, counselor, here’s your post…]

For my birthday recently, my family bought me some really pricey shit.

Okay, it wasn’t actually feces. But it had been plucked directly from feces, and that’s close enough.

Kopi Luwak, or ‘Civit Coffee,’ is made from berries that have been eaten and excreted by the Asian Palm Civit (Paradoxurus hermaphrodites), a small catlike mammal found along the Indonesian archipelago. No particular coffee species need be employed, since ‘Kopi Luwak’ refers to the, er, processing rather than the variety of bean. 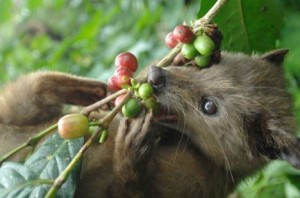 the star of the show

Connoisseurs claims that the resulting Kopi Luwak brew is sublime for two reasons – selection and digestion.

Of the former, it’s because the civit intentionally seeks the juiciest and ripest coffee berries to consume, far more selectively than what is accomplished by (human) manual picking and mechanized sorting.

Of the latter, the fleshy pulp of chosen berries is fermented in a civit’s gut during digestion. This occurs as the animal’s proteolytic enzymes seep past the berries’ outer shells, resulting in a chemical malting reaction that is said to change the flavor of the end product.

The coffee, collected wild, is very expensive because it is labor-intensive (farmed/ caged civit coffee is considered inhumane and inferior, and responsible brokers avoid dealing with that product). After spending approx. 36 hours in a civet’s digestive tract, the beans are defecated in clumps, having retained their shape and intact layers of shell and pulp. Workers then go around picking up the clumps and extracting the undigested bean parts, washing them (!) and transporting them for further sorting and roasting.

However, not all critics are uniform in their praise. For example, Tim Carman, food writer for the Washington Post, reviewed Kopi Luwak and concluded that “it tasted just like Folgers. Stale. Lifeless. Petrified dinosaur droppings steeped in bathtub water. I couldn’t finish it.” Other equally vocal critics claim that Kopi Luwak is simply bad coffee, purchased for novelty rather than taste.

But in the United States, Kopi Luwak sells for approx $700 per kilogram. And with that kind of money involved, you can predict there will be ripple effects.

1. Researchers at the University of Guelph in Ontario, as well as the University of Florida, have tried to replicate the malting processes in the lab, developing a means by which Kopi Luwak can be made, minus the civits. No word on success yet.

2. There was recently a Craigslist ad in Portland OR from a man named Randy who said he’d eat and defecate the beans himself for a fraction of the price, $30 per kilogram. No word on takers yet.

3. Can’t find civits? Entrepreneurs in southeast Asia are marketing Elephant and Panda Coffee using those species’ respective droppings. No word on sales yet.

But back to my birthday present. How, you ask, did the joe taste? It was nothing special. It tasted like coffee. I think the hype is a crock of… well, you get the picture.