It is not uncommon for some to see a psychiatrist to attempt to gain a mental diagnosis and a subsequent disability check. By no means, though, is psychiatry the only medical discipline that encounters those who fabricate; it’s found everywhere, and unfortunately such ‘gaming’ of the system happens all too frequently. Not only is it indisputably dishonest, but when successful, it robs from our limited resources those monies that would otherwise be spent caring for individuals with legitimately disabling conditions.

The reader may take small solace, then, in the knowledge that such trickery is by no means new, nor restricted solely to our 21st century. 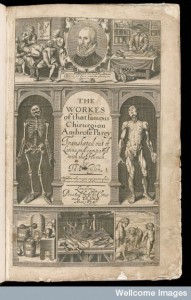 The 1634 edition of the works of French surgeon Ambrose Paré include several stories of frauds who pretended to be suffering from horrible ailments for the purpose of begging in the street from sympathetic pedestrians. His introduction included the warning that such beggars were not only not desperate, but were capable of other criminal actions, and that the honest charitable reader should take heed.

In his words, “some there be who are not content to have mangled and ulcerated their limbs with caustic herbs… or to have made their bodies more swollen, or else lean, with medicated drinks, or to have deformed themselves in some other way, but from good and honest citizens who have charitably relieved them, they have then stolen children! [All the while] pitifully complaining that they came by this [physical] mischance by thunder or lightning or some other strange accident.”

Paré tells the first clinical case in his text: “Not very long ago, a woman offered herself [for charity because] her womb was fallen down by a dangerous and difficult birth, wherefore she was unable to work for her living. Then [those running the charity] commanded that she be tried and examined, according to the custom, by the chirurgians (surgeons) therefore appointed. Who, seeing how the whole business was carried, made report that she was a counterfeit, for she had thrust an ox’s bladder, besmeared with beastly blood, into the neck of her womb…. For this she was put into prison, and being first whipped, was after banished.”

And then he relates a second case: “There came presently to us a well flesh’d woman, begging alms, and taking up her coat and her smock, she showed a great gut hanging down some half a foot, which seemed as if it had hanged out of her fundamnet [anus], [from which] there dropped filth like pus, which had stained her legs and smock, most beastly and filthy to look upon. [My colleague] asked her how long she had been troubled with this disease; she answered that it was four years since she first had it. Hence he easily gathered that she played the counterfeit, for it was not likely that such abundance of purulent matter came forth of the body of so well flesh’d and colored a woman; for she would rather have been very lean and in a consumption. Wherefore provoked with just anger, by reason of the wickedness of the deceit, he ran upon her and threw her down upon the ground, and trod her under his feet, and hit her with blows upon the belly, so that he made the gut which hung [down], to come away, and by threatening her with more grievous punishment, made her confess that it was not her gut, but that of an ox, which being filled with blood and milk, and tied at both ends, she put into her fundament, and let the filth flow forth at very little holes.”

What is perhaps of most interest is not the fakery nor the repeated use of body parts from oxen. Rather, the doctor’s assault is reported without shame or regret; it is seen as stemming from just and righteous anger, fully expected of a medical professional when uncovering a fraud who was preying on the good.