Although Boney and I were heading due east, there are no easily traversable roads in that direction when one exits the missile facility – there are goat paths and large mountains on the horizon ahead. Thus, it’s either turn-right/ south into Mexico, or turn-left/ north to the interstate. As my friend did not have a passport, we opted for the latter.

It’s only a dozen miles to the highway near Tucson, and this backtrack gave us an opportunity to quickly visit a site I’ve seen several times previously, but one that I never miss if possible. 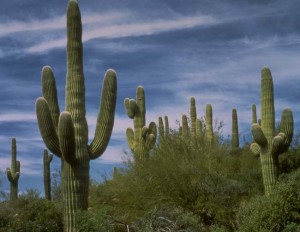 Paradoxically, the giant saguaro cactus, Carnegiea gigantea, is a universally recognized symbol of the American West – its blossom is the state wildflower of Arizona – and yet it grows in the U.S. in only a relatively small swath of territory south of Flagstaff and in a sliver of southeastern California (there are far more saguaros in Mexico than in this country).

The saguaro is often used – incorrectly – to convey a sense of the Southwest, even if the product in question has no connection to Arizona or the Sonoran Desert. For instance, no naturally occurring saguaros are found within 250 miles of Texas, but its silhouette is found on the label of Old El Paso brand products. And though the geographic anomaly has lessened in recent years, Western films once enthusiastically placed saguaros in Monument Valley far to the north, as well as in scenes from the Lone Star State, New Mexico, Utah, and Nevada.

Saguaros don’t sprout their familiar ‘arms’ until almost a century in age, and can then sometimes grow to a final height of more than 65’. When close, one can often see ‘bird holes’ drilled in the sides of adult saguaros, in which nest woodpeckers, martins, finches, and flickers. Even when they die, the saguaro persists in its stately presence; the endoskeletons – reminiscent of the staves of a barrel – can remain standing, bleached and firm, like ghostly sentinels. These living giants are a truly magnificent presence in the wild, and are not to be missed.

Saguaro National Monument was created by President Hoover in 1933. It was then elevated to National Park status in 1994. The park is divided into two sections lying east and west of downtown Tucson, the total area of which is over 91,000 acres. This protected wilderness is largely devoid of evidence of humans, despite its proximity to population centers; there is a one lane road that snakes through the park, plus hiking trails and scenic stops. Both sections of the park conserve impressive tracts of Sonoran ecosystem, which includes not only a vast number of saguaros, but also barrel cacti, cholla, and prickly pear. There are petroglyphs in the park, and more than a few endangered animals, including the Lesser Long-nosed Bat and the Mexican Spotted Owl. Plus there’s the abandoned Old Yuma Mine, though it’s off-limits to visitors.

Even outside the park, harming a saguaro in any manner, including cactus plugging (i.e., target practice) is illegal under Arizona law. When houses or highways are built, special permits must still be obtained to move or destroy any saguaro affected. Penalties for violators are stiff.

Time is of the essence, and the Bonemeister and I can only enjoy a brief drive around the perimeter road of the easternmost half. Those few minutes do not begin to do justice to these amazing giants, but I don’t pass up the opportunity to stop the car and stand next to them. The saguaros are best seen at twilight, when they are silhouetted in the beauty of a desert sunset. But my late colleague and I have miles yet to go, and we want to reach our favorite brothel before it closes that afternoon.