“I like to tell people that I have the heart of a small boy, but then I add that it’s in a jar on my desk” ~Stephen King

I wasn’t kidding when I said in my online introduction that this blog would be “the attic of [my] psyche.” While I try to focus on items of a historical nature as they pertain to medicine in general, and psychiatry in particular, there are just too many interesting things ‘out there’ to thematically restrict my posts entirely.

But that’s not necessarily a sign of an attention-deficit spectrum disorder. As a matter of fact, there is a long and storied history of just such collecting (be it of objects or ideas), and before I go further with my blog, I think I should share this background with the readership.

The wunderkammer (“wonder-room”) was a phenomenon which arose in the courts and parlors of Europe in the early days of the Renaissance. It was an attempt (by those who had the means) to display the erudition and wealth of the owner. These encyclopedic amalgamations could be as small as those contained in a large chest of drawers (what would later evolve into modern day curio cabinets in which grandma keeps her tchotchkes). They could also be as vast as those contained in whole wings of a palace or mansion. In time, their German moniker gave way to an English term: the cabinet of curiosities (the original use of the word “cabinet” describing a room rather than a piece of furniture).

So what exactly was contained in a cabinet of curiosities? Well, just about everything and anything; it was a juxtaposition of widely disparate objects, their only unifying feature being their rarity or ability to fascinate. Such cabinets tended to focus on natural history (sometimes faked; e.g., unicorn horns, mermaid remains, dragon eggs, and phoenix tail feathers). They also stressed geology, ethnography from distant and mysterious lands, archaeology, religious or historical relics (more fakery; e.g., pieces of the True Cross and Ark of the Covenant), works of fine art, clockwork automata, and miscellaneous antiquities.

In short, they were microcosms of the known and unknown worlds, and many of the better ones formed the nuclei of present day museums – the British Museum’s ‘Enlightenment Gallery,’ the Ashmolean and Pitt Rivers Museums at Oxford, and Vienna’s Museum of Ethnology all started out this way. The concept of the cabinet of curiosities also gave rise to later 19th century hucksterism in the form of P.T. Barnum’s freak shows, and in the present, to the nationwide grotesqueries of Ripley’s Believe it or Not, and the tongue-in-cheek displays of the Museum of Jurassic Technology in Los Angeles.

Although referenced in texts far earlier, the first wunderkammer appeared in illustration in 1599, in Naples; the engraving shows a room fitted out like a studiolo, with built-in cabinets, the front panels of which could be unlocked and lowered to reveal intricate pigeonholes for display. In this 16th century print, identifiable mounted birds and reptiles, along with other strange and curious animals of uncertain provenance, are also seen suspended from the ceiling.

Both the wealthy and the learned fell under the spell of competing with each other for the best assortments of curios. Ferdinand II of Austria had a vast wunderkammer. Charles I of Great Britain also had one. The Holy Roman Emperor Rudolf II created such a space in his castle to which he retired to contemplate life when weary of the affairs of state. Others with notable collections included Gustavus Adolphus of Sweden, Sir Hans Sloane, both Augustus the Strong and Christian I of Saxony, Francesco I de Medici of Tuscany, Frederick III of Denmark, Tsar Peter the Great, Sir John Tradescant (said to possess Chief Powhatan’s deerskin mantle), the Hapsburg Dynasty (said to possess Montezuma’s headdress) … the list goes on and on.

During the Enlightenment, traveling to see these wondrous collections became the rage, so much that guide books and catalogs were published – Musaeum Tradescantianum (1656) by Ashmole, Museum Museorum (1714) by Valentini, and Schuyl’s catalog of 1727 all come to mind. 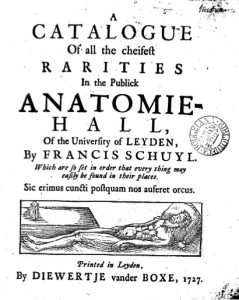 Schuyl’s catalog of 1727 (courtesy of Univ of Leiden)

And in a modern analogy to our era’s bloggers, both Ole Worm and Athanasius Kircher used their personal collections as starting points for published speculations on philosophy, science, and natural history. Just think what Worm and Kircher could have accomplished with the Internet!

The collecting bug finally crossed the Atlantic. Dr Thomas Mutter, a prominent surgeon in Philadelphia, gathered medical oddities and related items from his own practice and those sent to him by colleagues. When he died in 1859, he willed his collection to the American College of Surgeons; with additions gathered in the subsequent years – including Benjamin Rush’s medical chest, Florence Nightingale’s sewing kit, an early 19th century saponified corpse known as the ‘soap lady,’ the conjoined liver of Siamese Twins Chang and Eng Bunker, and President Cleveland’s resected mandibular adenocarcinoma – these holdings became today’s Mutter Museum.

Add’n, there was the Hobby Club in New York City. In 1908, it was formed as a rival to the cross-town, tangentially related, and better known Explorers’ Club. The Hobby Club was a lavish dining fraternity limited to 50 men of education and means, and was basically an opportunity for grown-up ‘show and tell.’ Selected items from each of the members’ cabinets would be brought to dinner meetings to share with the other attendees. According to its constitution, “the object of [the club] shall be to encourage the collection of literary, artistic and scientific works; to aid in the development of literary, artistic and scientific matters; to promote social and literary intercourse among its members and the discussion and consideration of various literary and economic subjects.” While the transcripts of a number of the group’s meetings from the years prior to WWI are extant, the club appears to have withered and died by the 1920s.

But NOT the desire to collect and explore.

With that background in mind, let the show begin…