While the Austrians employ Krampus at the holidays to scare children and guarantee their future in psychotherapy, the Dutch tweak the concept to give it less scary but arguably more racist appeal.

Pere Fouettard (France) and Black Peter (UK) are names for the character whom the Dutch know as Zwarte Piet. Like Krampus, he is also a companion of St Nicholas, but unlike the beast, Piet is often referenced tongue-in-cheek as a “colonial hangover.” His was a relatively late start in life – the first mention of him was only as recently as the early 19th century – but he has compensated by being less politically correct than Krampus. 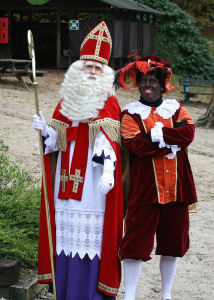 While he is said to be the keeper of the list of those naughty and nice – apparently he eavesdrops near chimneys to determine this information – he doesn’t punish children himself. He must outsource, because Piet more often tosses candy at the kiddies and acts the fool as a sort of Yuletide court jester while the Jolly Old Elf himself is otherwise occupied.

And that eavesdropping behavior leads us to one story of his purported roots. Depending on which source you believe, Piet is black either because 1. he’s actually a soot-caked chimneysweep who overhears so much useful dirt – pun intended – hanging above fireplaces that Kris Kringle put him on the payroll, or else 2. he’s a Moorish slave whom the historical St Nicholas is said to have miraculously freed from bondage at the court of the “Emperor of Babylon,” and who, in gratitude, enlisted to become his liberator’s lifelong (presumably free) sidekick.

The chimneysweep story is charming, but unlikely, since mid 19th century sources clearly describe Piet as “negro,” and at that time in the Netherlands, chimneysweeps were not of African descent, but rather were mostly itinerant Spaniards or Italians.

Needless to say, whatever the original intent, Zwarte Piet has become controversial. While surveys have repeatedly shown that 92% of the Dutch public do not view Piet in a derogatory light – both boys and girls actively vie for the role in local events – there have been increasing editorial calls for his removal from annual Sinterklaas parades. The Dutch version of Sesame Street has struggled with the topic. Fights with arrests have been recorded at supposedly happy holiday events when pro-Piet and anti-Piet factions are unleashed. And there has even been one documented death threat stemming from the controversy (a far right wingnut threatened an activist who wanted Piet gone).

In the alternative, some have said that the character just needs to change his appearance by eliminating the frizzy wig and black face. For a few years, some Piets appeared with rainbow paint over their faces to symbolize all-inclusiveness.

Until some expressed offense that this new all-inclusive Piet might, in fact, have a surreptitious LGBT agenda.