In modern America, Santa Claus is a lone wolf. That is, he does his good deeds solo on Xmas Eve, unless you count the elves back at the North Pole or the reindeer team that flies him all over on the night in question.

But in other parts of the world – in this case, Alpine Europe – Santa has a helper.

No, not that cute little sorority girl on holiday break, wearing the short faux-ermine trimmed red skirt, who poses the kiddies for the obligatory photo with the Fat Man.

Krampus is a devil-like character who seems to have sprung initially, ready for malevolence, from small towns in medieval Austria. He segued into Father Christmas’ helper, but lacks the kindly aesthetics of his boss – he’s black and hairy, has horns, cloven hooves, a tail, and a long red forked tongue; he is often portrayed sporting chains or a handful of switches and a Jack Nicholson-esque affect.

I say ‘devil-like’ because Krampus isn’t Beelzebub himself, but instead is said to have been a pagan deity who was demoted and rendered eternally subservient to the man driving the sleigh. His Monstrosity goes by many different names across the Continent – Knecht Ruprecht, Certa, Perchten, Schmutzli, Pelznickel, Klaubauf – but Krampus, his Germanic nom de guerre, is likely his best known. 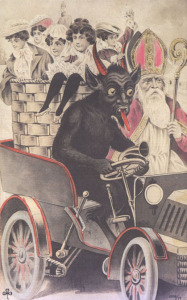 he gets to drive!

His job description? On the night of December 5th, punish unruly children and free his boss to attend to the more widely anticipated and pleasurable distribution of gifts. Some of the ne’er do wells get spankings, some are slapped in irons and held captive in a large basket or washtub strapped to Krampus’ back. Those kidnapped are said to be carted off to the woods where they are drowned, eaten, tortured or deposited in the beast’s lair for later abuse. Of course, at his discretion, Krampus might just dump all those losers straight down the gaping Hellmouth to Hades. No one really knows for certain. 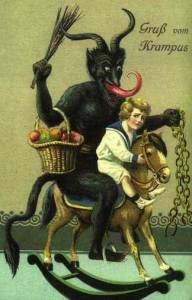 But do you want to chance it?

Women, being hardly more esteemed than mere children, are not safe either, except, interestingly, Krampus seems to entertain more prurient designs on adult females. Late 19th century pictures of the demon often show him ogling attractively busty and well-coiffed ladies – perhaps as punishment for a fashion faux-pas or a burnt dinner? 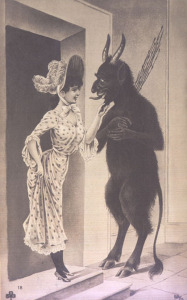 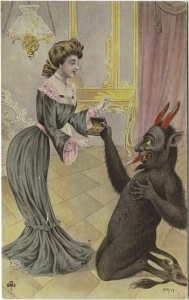 don’t be fooled by this slick act

Being a busy guy, Krampus really doesn’t have the energy to devour all of the children so richly deserving same. Thus he is also seen in period woodcut prints handing out switches to large families… sort of a DIY effort to save time.

Never passing up an opportunity to drink and carouse, though, modern Euro-adults co-opted the whole Krampus schtick and turned it into Krampusnacht, alcohol-fueled revelry which takes place on the eve of St Nicholas’ Day far and wide. Though not much prevalent in North America – yet – Krampusnacht involves masquerade balls, tomfoolery, pranks, banging on pots and pans, and the bearing of torches all over town. And just as the day after Thanksgiving is the busiest for plumbers, Krampusnacht keeps the constabulary busy into the wee hours.

That noted, a further word of caution: if you encounter Krampus, play it safe and give him his traditional due, an offering of schnapps. This will usually make him go away and torment elsewhere.

Is it any wonder that Freud’s original analysis patients were mostly Austrian?