“Fire roared through a mental hospital [in Asheville, NC] early yesterday and snuffed out the lives of nine female patients. They died as 20 others, some screaming, some calm, were led to safety. Flames quickly engulfed the four-story central building of the Highland Hospital for Nervous Diseases. Wailing of some of the women echoed over the spacious grounds. Firemen, police, nurses, doctors and townspeople rushed to the rescue. But seven women were trapped on the upper floors. Two others removed by firemen died in a short while. It was the third fire in the hospital in less than a year…. [the ass’t supervisor] described how she and [the] supervisor … first went after the helpless patients: ‘we felt that the others were awake and would help themselves; as soon as we got the helpless ones out and safely put away elsewhere, we rushed back to help others. By then we knew some had been trapped. Some of them were awake, we know, and were rousing the others. It seemed no time at all until the entire building was like a furnace.’” ~Florence (SC) Morning News, 12 March 1948. 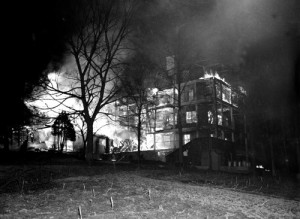 Highland Hospital, located in the fashionable Montford neighborhood of Asheville, was originally called “Dr Carroll’s Sanatorium” when opened by its namesake in 1909. In 1939, Dr Carroll gave the hospital to the Duke University Medical Center in Durham, over 200 miles away, and the university subsequently operated the facility from a distance. It became the destination for the wealthy and well-known who needed therapy, solitude, and privacy to escape their demons. Unlike many other mental hospitals of the day, Highland emphasized purposeful activities, healthy diet, fresh air and clean water, exercise, and the quiet beauty of the natural surroundings as being therapeutic. But over time they eventually offered the other accepted treatments of the day, including insulin shock, lobotomy, and electroconvulsive therapy.

And predictably, safety codes were not to 21st century standards. Fire escapes were made of wood, as were the dumbwaiter shafts that acted as conduits for fire. And oft-repeated rumors that patients were sedated and locked in their rooms at night were never fully quelled.

One of the victims of the 1948 fire was the former Zelda Sayre of Montgomery, Alabama. She was waiting to receive ECT when the fire ended her life. She is better known to the world by her married name – Fitzgerald – and her passing was a tragic final footnote to a fast-paced and illusory life of glamour that has captivated the public for almost a century.

Born into privilege in the Deep South – her father was on the Alabama Supreme Court, while her maternal grandfather and great uncle were both U.S. Senators – Zelda Sayre was a debutante whom her husband called ‘the first American flapper.’ She was a sexually liberated free spirit in an age when women were still largely expected to be seen and not heard. Unfortunately, the extroversion and tangentiality for which she was known were likely harbingers of the mental illness that would consume her – contemporaneous hospital records suggested a diagnosis of ‘schizophrenia,’ whereas in retrospect a bipolar diathesis and borderline personality disorder are much more likely.

At first she was unimpressed with her suitor, F.Scott Fitzgerald. He was Catholic, a struggling writer living in penury who drank too much. She had many other romantic options… and exercised them regularly. But when Scott’s first novel, This Side Of Paradise, was published to acclaim in 1920, Zelda finally relented to marriage.

The newlyweds in public were the Jazz Age personified. In private, these darlings of the Roaring Twenties instead battled jealousy, infidelity, acrimony, and resentment. Their parties became less pleasurably hedonistic and more intensely self-destructive. Zelda felt that she had given up promising careers in art and ballet and was being smothered by her husband. After Zelda’s first admission to a mental asylum, Sheppard-Pratt outside Baltimore in 1930, Scott increasingly viewed her as an unstable financial and emotional burden.

Interestingly, Zelda, while hospitalized at Sheppard-Pratt, wrote the draft for what would become her first and only novel, Save Me The Waltz, a book that angered Scott because of the autobiographic information on the marriage it contained (an odd accusation when one realizes that Scott’s later Tender Is The Night is highly autobiographical of the marriage as well). 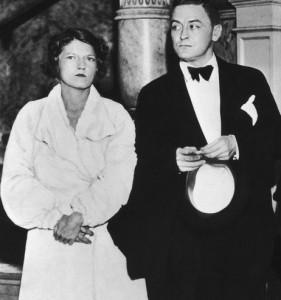 Zelda’s residence at Sheppard-Pratt was followed by times spent at asylums in both France and Switzerland during the expat years, at least one overdose on sleeping pills not followed by an inpatient commitment, a stay at another Baltimore-area hospital upon return to the U.S., and then her involvement with Highland, first in 1936. It was at Highland, on and off, where Zelda would spend the final dozen years of her life, rarely visited by Scott.

Following a disastrous trip to Cuba for the couple in 1938 – they fought constantly on what was billed as a therapeutic vacation, and Scott was beaten by angry locals when he tried to stop a cockfight – Zelda returned to Highland and Scott headed to Hollywood in an attempt to rejuvenate his career. When Scott died in California in 1940, he had not seen or communicated with Zelda for 18 months.

Zelda was eventually interred in Baltimore next to Scott.

Nothing was ever built on the site of the fatal fire. A grassy field remains as silent testimony to the lives lost.

The rest of the Highland campus, however, was sold by Duke in 1980 and now houses corporate offices of Genova Diagnostics.

The use of lithium salts to treat bipolar disorder – a treatment that might have made a substantial difference for Zelda’s stability – was rediscovered by John Cade, M.D. … the year after her death.

And this post’s title? It is said that Don Henley of the Eagles was so impressed with a biography of Zelda Fitzgerald that he co-wrote the song Witchy Woman in the 1970s with the seductive, uninhibited, reckless, tragic enchantress specifically in mind.