En route earlier this month to Druskininkiai, a spa-resort town near the border with Belarus, our cousin, driving us in his minivan, was nabbed by a Lithuanian highway patrol car for speeding. 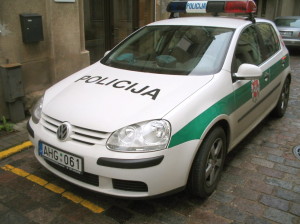 It actually wasn’t his fault; he was passing and accelerated to get by the other car at the very moment that the trooper with the radar gun appeared out of the forest ahead. There was no where to hide. We pulled over and the trooper approached the driver’s window.

That was the bad news.

Eduard exited the car to speak to the policeman, and it was apparent even to those of us who do not fully understand the language that a ticket was going to be issued. No warnings here.

The odd news is that, in Lithuania, if you are nabbed, you pay your ticket directly to the police. Right then and there. And you don’t use cash – you use VISA or MasterCard.

The policeman had to figure out how to swipe the credit card using the laptop in his cruiser – apparently he was new on the job.

The good news – and I learned this much later – is that, at the current exchange rate, the ticket cost us about $10 USD and comes with no points.