My cousin, the Air Canada flight attendant, periodically contributes to this blog. She wrote a post on Venetian Carnevale last Spring, which can be read at this link:

Now, here’s another installment from one of her recent layovers in Italy:

“It is a well-known stereotype – with more than a small kernel of fact – that Italian men drive like lunatics. Nothing that I have seen has lessened that impression. The streets in Florence are clogged with a mixture of ‘regular’ cars (Fiats), Smart cars (those adorable little two seaters), Vespas and other scooters, motorcycles, public buses, street-sweepers, odd three-wheeled contraptions called Crickets, and bicycles. Lots and lots of bicycles. Everything is weaving and darting in amongst the pedestrians crossing the streets and not paying attention to where they are going. The mixture entropically flows in all directions, and yet I have seen only two wrecks: a bicycle-pedestrian collision on my first trip here in which both parties were tourists not acclimated to the chaos, and a bus-Fiat impact yesterday, in which the two vehicles smacked and yet never stopped (many cars in town have huge dents from passing collisions just like this one).

Despite this potentially deadly pandemonium, the locals don’t seem to do anything to improve the situation, and in many ways appear to relish the traffic cyclone, revel in it, and even magnify it. Case in point: this afternoon, I was window shopping along a typically clogged road, and a bicycle passed me with a basket on the front. The rider, wearing a delivery uniform, was going at a good clip, dodging in and out of the crowd and avoiding obstacles as they appeared in front of him. I watched as he zoomed past me. He neared a small trattoria ahead, and he slowed slightly and yelled something in Italian at the door. Then he started pedaling like a fiend, laughing uproariously. I wasn’t quite sure at first what he had yelled or what had caused the furious pedaling afterward, but then a very angry appearing Jack Russell terrier came ripping out of the door, teeth bared, snarling furiously, and took off after the two-wheeled interloper. 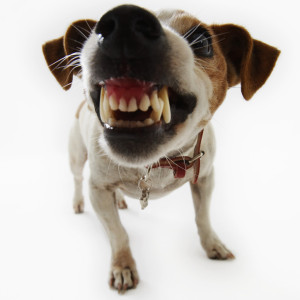 don’t come around here no more!

Apparently this was a longstanding ‘feud’ and the delivery guy knew that the dog would chase him. The rider was pedaling even faster and yelling at the dog as he looked over his shoulder. Of course, the mad mixture of traffic and pedestrians was parting like the Red Sea, with those in harm’s way jumping to avoid the onslaught. The chase lasted for a full city block, and then, by precedent I suppose, the dog reached the stop sign at the end of the block, past which the bicycle had blasted just milliseconds before, snarled one last snarl, and turned and trotted back to the trattoria. The “audience,” which had just dodged these two Bats out of Hell, applauded heartily up and down the street (I think for the dog, not the delivery guy). The amazing thing was not even the chase itself, but the fact that in the traffic mess, no one was hit or injured!”