The young Quaker from Morrisville, Pennsylvania, decided early in life on a career in medicine. He began his studies under the tutelage of a Dr Nicholas Belleville in Trenton, New Jersey, when the former was not yet eighteen years of age. Once the basics had been mastered, he matriculated at the University of Pennsylvania and received a medical degree in 1832. Graduation was followed by a number of years of successful private medical practice.

His name, Thomas Story Kirkbride, is little known today outside of historical, psychiatric, and architectural circles. It is unlikely that his mentor Dr Belleville, or the professors at the university, could have predicted the degree to which their student would later contribute to medicine and psychiatry, or the manner in which he would influence the care of patients in the United States during the 19th and 20th centuries. In 1840, Kirkbride left his private practice to assume the superintendency of the Pennsylvania Asylum for the Insane (PAI). The hospital complex consisted of two large buildings and a garden, known as the ‘pleasure ground,’ on a campus that stretched from 45th to 49th Streets along the north side of Market Street in Philadelphia. Additional building construction and improvements to the physical plant were almost finished when Kirkbride arrived, and though PAI was considered progressive for the day, Kirkbride probably realized quickly that further advances were needed.

Asylums in the United States in the first half of the 19th century, and even PAI to a degree, were still managing patients in ways that shock most 21st century professional sensibilities. Crowding and unsanitary conditions to varying extents were widespread. Punishment was often employed as much as actual treatment, and violent forced feedings, forced hydrations, and the use of seclusion, restraints, and icy baths were not uncommon. 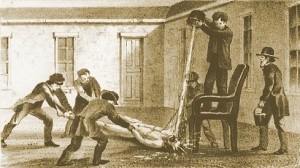 Patient ‘care’ in the 19th century (courtesy of CornellPsychiatry.org)

Kirkbride, largely because of his upbringing, was familiar with the Quaker’s York Retreat in England and its theory of ‘moral treatment’ of patients. Moral treatment emphasized a calm, respectful, and collaborative approach to care. Based on the principles of moral treatment and his own clinical experiences, Kirkbride began to refine the guidelines for humane and effective care of the insane at PAI; this approach included features such as less or no punishment, more recreational time, the availability of private patient rooms, more fresh air and sunshine, and cleaner and more attractive physical surroundings. Kirkbride finally published these beliefs in his seminal work of 1854, On the Construction, Organization, and General Arrangements of Hospitals for the Insane, with Some Remarks on Insanity and its Treatment. The theories came to be known as the ‘Kirkbride Plan,’ and hospitals designed with his guidelines in mind as ‘Kirkbride hospitals.’ 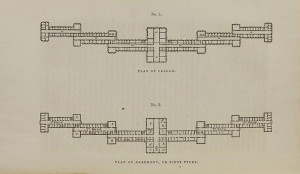 Kirkbride’s recommendations were controversial in his day, and agreement was far from universal. Some felt that there was nothing wrong with the longstanding quasi-punitive manner in which patients were widely managed up to that point. And then there were those advocates who suggested that Kirkbride’s moral treatment didn’t go far enough.

A number of Kirkbride hospitals were built in the United States in the second half of the 19th century. Amongst them were the New Jersey Asylum for the Insane (the first entirely Kirkbride-influenced facility, opened in 1848), Bryce Hospital in Alabama (1859), the Trans-Allegheny Lunatic Asylum in West Virginia (1863), Danville State Hospital in Pennsylvania (1869), the Athens Lunatic Asylum in Ohio (1874), Broughton Hospital in North Carolina (1875), Clarinda State Hospital in Iowa (1884), and Sheppard-Pratt in Maryland (1891) to name just a few.

Kirkbride went on to become a founding member of the Association of Medical Superintendents of American Institutions for the Insane, the precursor organization of today’s American Psychiatric Association. He also remained the superintendent of PAI for the remainder of his career. And in a sign of how mores have changed since the 19th century, Kirkbride later married a former asylum patient after his first wife’s death, and lived with his extended family in a residence on the grounds of the asylum, where he died at the age of 74.

Kirkbride’s moral treatment? With modern refinements it lives on. But the Kirkbride hospitals? As most were large imposing Victorian buildings on vast swaths of land, they proved too expensive to run and maintain, especially in the age of deinstitutionalization. A very small number are still used for patient care, but others have been torn down, abandoned, or converted to commercial, other public sector, and residential uses.