On this date in 1690, a highwayman named Thomas Rowland was hung at Tyburn, the execution ground for the city of London since at least the 12th century. 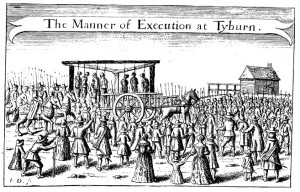 The Gallows at Tyburn

He had been a bricklaying apprentice before deciding that robbery was a more exciting and lucrative career. Interestingly, he committed his crimes dressed as a woman, the disguise helping him to stay at large for almost two decades (though it should be noted that when fleeing the crime scene in drag, he rode astride his mount and not side-saddle, his attire notwithstanding).

The condemned of the era were held at Newgate Prison near the Old Bailey in London before being transported by ox-cart to the killing field. Newgate, however, was not managed as we might expect of a prison today. Male and female prisoners were commingled, as were those of different degrees of offense and age. Newgate, you see, was a profit-making enterprise; the Keeper (warden) paid to assume the position, with the expectation that he would then profit from the prisoners, who were expected to pay for food, clean water, visitors of all stripes, alcohol (!!) and the more desirable cells.

As was traditional at these public events, the Ordinary (chaplain) of Newgate Prison accompanied the condemned to the gallows and exhorted them to repent at the last minute, so that they could present a cleansed soul to the Almighty at the Pearly Gates.

Said obdurate Thomas Rowland, however, would have none of this morality play, according to contemporary accounts. Not only did he refuse to confess and repent, but one observer noted that he “was so abominably wicked that the very morning on which he died… a common woman of the street [came] to visit him, [and] he had the unparalleled audaciousness to act carnally with her, and gloried in the sin as he was going to execution.”

He must have had some explaining to do to St Peter.