I was once of the mindset that paying for business class seats on an airline trip was frivolous lunacy. “The back of the plane arrives at the same time as the front of the plane!” I sniffed.

That was until a lost reservation and hurried apologies resulted in my last second upgrade from steerage to business class on a flight from Beijing to Shanghai in 2002. From that point forth, I was hooked. Money be damned, the front of the plane IS better, and I don’t care which end of the plane arrives first!

“My tastes are simple… I only desire the best.” ~Winston Churchill (attr.)

The same can apparently be said for all sorts of travel perks. Those of you who are already jet-setters, or who remember Geo Clooney’s 2009 film, ‘Up In The Air,’ will no doubt agree.

When my kids were younger and I would visit them in Texas, I stayed at the nearby Holiday Inn. It was inexpensive and conveniently located. While far from luxurious, it was predictable, much as is a McDonald’s hamburger when you’re really hungry and there are no other nearby options.

Over time, I accumulated a lot of Holiday Inn points. Unfortunately, those points earn me only an occasional free night at the hotel chain, and a lot of complimentary chocolate chip cookies and bottles of water at check-in.

Not so those who travel on a different strata.

“I’ve been rich and I’ve been poor. Rich is better.” ~Sophie Tucker

Take, for example, the missus. When she travels for work, her multinational company puts her in the better Marriott properties – definitely a grade above my mere Holiday Inn visits. She travels a lot, so while not at Clooney-grade, she racks up lots of points, rendering her Triple Platinum Status with added Diamond Clusters, or some other such moniker. And with her apotheosis to that exalted level comes more perks than my chocolate chip cookies. 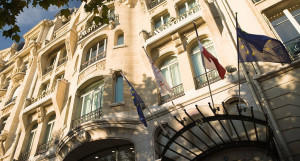 Case in point: we were recently staying at the Marriott at 70 Avenue des Champs-Élysées in Paris, using my better half’s points. It is a grand residence indeed, built behind the historic fin de siècle façade of the former Louis Vuitton headquarters, just a few minutes’ stroll from the Arc de Triomphe, and with a breathtaking view of the Eiffel Tower soaring above the rooftops less than 2km away. My Houston-area Holiday Inns just do not compare. Anyway, it was late on a Sunday evening, and we developed a hankering for a bottle of good Bordeaux, perhaps a 2010 Leoville Barton St Julien. Being in Paris, and not the American Bible Belt, we assumed this would not be a difficult item to locate after dark on a Sunday.

But no Parisian concierge worth his Clefs D’Or leaves a platinum and diamond encrusted guest in the lurch.

Whipping out his cellphone, he made several hurried calls en Francais, and then informed us that the proprietor of the best wine shop in the area had agreed to reopen for us, in order to procure the bottle we desired. Directions were jotted, and we headed off. Although the main boulevard was crowded with café patrons, the side streets were quiet and subdued. A block off the Champs, we came to a darkened store front that read simply ‘Vin.’ There we no lights inside. But we had been given a special knock for the front door. As assured, once the knock was administered to the heavy oaken door, it creaked open and we were admitted to the sanctum, filled with bottles. In fractured English, the owner apologized for not turning on the lights so as not to draw customers (i.e., commoners) to the shop.

A modest handheld light was produced, the vintage was secured and wrapped, Euros were exchanged, and in just a few minutes, we were on the sidewalk with our libation securely under arm.

Back in our room, overlooking the madding crowds below, we toasted on the balcony having interloped into circles of Parisian privilege, if only for an evening.

“Let me tell you about the rich. They are different from you and me.” ~F.Scott Fitzgerald, 1926