On this date in 1480, Ottomans invading Otranto, Italy, conducted a mass execution of prisoners.

Landing at the southern Italian city on July 28, the Ottoman force quickly overwhelmed Otranto (the city had rashly killed the messenger come to offer a merciful capitulation, only to find that its military garrison began deserting within days.) On August 11, the Turks took the city by storm. Thousands died on that day’s bloodbath, including the Archbishop of Otranto.

Surviving women and children were sworn into slavery. Men over age 15 had the choice of conversion — or death.

“Now it is time for us to fight to save our souls for the Lord!” a Christian shoemaker is said to have exhorted his 800 fellow prisoners. “And since he died on the cross for us, it is fitting that we should die for him.”

As you wish. The Turks had 800 faithful Christian souls dispatched to their eternal reward at the place still known as the Hill of Martyrs (when in Otranto, visit it by taking via Ottocento Martiri, just off via Antonio Primaldo — that’s the name of the militant shoemaker).

This, at least, is the most pious version of this story. The mass execution certainly did occur, but some latter-day historians like Francesco Tateo have argued that martyrdom is not attested by any of the contemporaneous sources, and the specifically religious understanding of events was only read in after the fact.

On whatever grounds one likes, Italy’s fractious city-states were deeply alarmed by the appearance on their shores of the all-conquering Turks. And in the ensuing months, they rallied together vowing to expel the invaders.

Fortunately for this coalition, the Ottoman sultan Mehmed the Conqueror died in May 1481, and a brief period of internal conflict within the empire over the succession perhaps led it to allow its Otranto outpost to wither on the vine. The Turks made peace and withdrew from their potential beachhead not long after, having held the city for just over a year. The bodies of many of the martyrs were said to have been found uncorrupted by decay. Those who had skeletonized were ensconced in the cathedral. 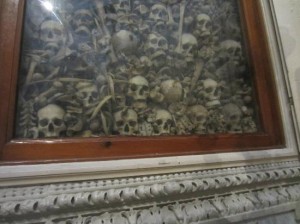 The Catholic church beatified the 800 martyrs in 1771, but their final elevation to sainthood occurred only in 2013, just three months ago. They were in the very first group canonized by the new Pope Francis — although the canonization was approved by his predecessor Benedict XVI on the same day that Benedict resigned his pontificate.

Considering current relations between the respective faiths, it was seen as a potentially impolitic move.

“By venerating the martyrs of Otranto, we ask God to protect the many Christians who in these times, and in many parts of the world, are still victims of violence,” Pope Francis said at the canonization Mass, diplomatically not naming any of those parts of the world.

Long respected as examples of steadfast piety in the face of death and beatified in 1771, these murdered souls were not actually canonized until Pope Francis did so two years ago.

But that didn’t mean that the Otranto relics weren’t put to good use long before 2013. 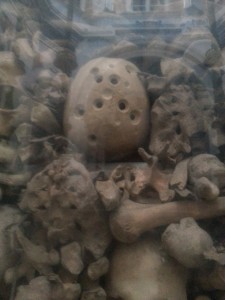 There is one skull in Otranto that is peculiar. Not only does it face backwards (all of the other skulls peer out at visitors), but its occiput and parietal regions manifest sixteen partially or completely drilled holes. These holes are of different circumference and depth, with only eight of them completely penetrating the cranial vault. The holes do not seem to be peri-mortem wounds, but rather occurred by use of a trephine, semi-lunar blade, or rounded drill bit long after death. Even more oddly, the visible marks, the shapes of the holes, and the types of instrument used suggest that only ground bone powder, not large fragments or chips of skull, resulted.

The reason for the holes remained a mystery until researchers at the University of Pisa announced their conclusions this week in the Journal of Ethnopharmacology. It seems that the Otranto skull in question was being used medicinally. 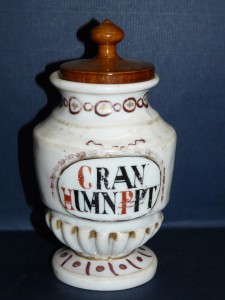 It was widely believed in the Middle Ages that the bones of martyrs held curative powers, esp when used for those who suffered from diseases of the head, either epilepsy or stroke with varying degrees of hemiplegia and paralysis. Medical practitioners of the day would take ground skull powder, mix it with water and wine, and have the patient drink the suspension. Physicians believed that spiritual powers from the body remained in the skull after death; ingesting remedies made from a human head allowed a patient to gain the strength of the dead person. This practice was so pervasive from the Middle Ages until the early 18th century that apothecaries in the major cities of Europe sold entire human skulls – at very high price – as ingredients for these desired therapeutic compounds.