Today, April 15th, marks exactly 102 years since the sinking of RMS Titanic in the cold waters of the North Atlantic. Over 1500 souls were lost that night.

Much has been written of the human tragedy. Less discussed are the animals which were lost. There were a dozen dogs on the ship during that voyage, and only three of them survived. 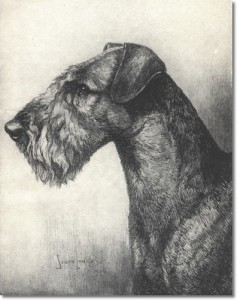 Those fortunate canines were all of very small breeds – two Pomeranians and a Pekinese. They were also all traveling with wealthy owners, as only First-Class passengers were allowed to have dogs on the ship.

One of the Pomeranians, Lady, was purchased in Paris by passenger Margaret Hayes just prior to embarkation. The other Pomeranian, name unknown, was owned by the Rothschilds.

As for the Pekinese, Sun Yat-Sen, he was owned by the Harper family (of the New York publishing firm Harper & Row).

These three were small enough to be unobtrusively wrapped in coats and blankets when the order to evacuate was given.

The other dogs – John Jacob Astor’s Airedale named Kitty, Helen Bishop’s Fox Terrier named Dog, Robert Daniel’s French Bulldog named Gamin, several whose names have been lost – were not staying in their masters’ cabins, but instead were in the ship’s kennel, sealing their fates.

One sad story involves Elizabeth Isham and her Great Dane, Rex. When the ship was foundering, Isham went to the kennel to get Rex. Once on deck, she was told that the dog was too large to be allowed on a lifeboat… so Isham got out of the dinghy and stayed onboard with him. When found several days later by the SS Mackay Bennet, the bodies of mistress and dog were found tangled together in Rex’s leash in the icy seas.

And as far as we know, there was only one canine-related insurance claim from the disaster. William Carter’s family brought with them on the voyage a King Charles Spaniel and another Airedale, having insured both dogs for a total of $300 (about $7500 today) given their championship bloodlines. The insurance company later made good on the loss.