When I was in high school, I served one summer as an intern on Capitol Hill for Senator Herman Talmadge (D-Ga). Though I only lived a few miles away in northern Virginia at the time, it was an exciting experience for a young man thrust into a world of power and privilege that seemed a vast distance from routine suburbia.

The ‘We Are Not In Kansas Anymore’ aspect of this was especially driven home for me when I observed that Senator Talmadge had an antique spittoon by the huge mahogany desk in his office – and used it regularly. He remains the only person I’ve met in my life who possessed a spittoon for anything other than decoration.

Anyway, on my first day as an intern, the Senator’s legislative assistant called me into the antechamber. He was a bookish looking fellow then in his late 30s who bore an uncanny resemblance to John Dean of Watergate fame. He opened his wallet and pulled a $20 and instructed me to go out to Constitution Avenue and hail a cab and tell the cabbie that I needed to be taken to an address on Pennsylvania Ave NW and ask for Christian and pick up a package. I was thrilled. I thought, “I wonder if that’s the address of a foreign embassy? Or a government think-tank? A powerful lobbying firm? Maybe it’s a secret enclave of the intelligence community!” I tried to appear as nonchalant as a 17 year old can look in this setting, but suspense got the best of me. I asked where I was going. He replied, “I was at the 21st Amendment last night (a famous but now extinct watering hole of the 1970s located in Foggy Bottom) and I got really shitfaced and had to walk home. I forgot my car keys, and I need for you to go and fetch them for me.”

So much for the start of my career with elected public servants and their minions.

But that’s not really the subject of today’s post.

While I was with Senator Talmadge in the Dirksen Office Building on the Hill that summer of 1979, I discovered the Capitol Subway deep in the basement. This “subway,” if you can really call it that, is more of an electric people-mover that connects the basement of the Capitol building proper with the office buildings of the U.S. Senate and House of Representatives nearby. The underground track was first installed in 1909 to connect only the Russell Senate Building with the Capitol through a narrow tunnel.

In 1960, an operator-controlled monorail was installed for both the Dirksen and Russell Senate Buildings, replacing the original primitive rolling stock. This was the system with which I was familiar. In 1963, the Rayburn House Building had its own line installed to the Capitol. And finally, in 1982, the Hart Senate Building was given a subway stop, though that didn’t exist when I was on the Hill. 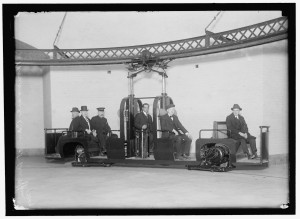 1909 Subway I (courtesy Office of the Capitol Architect) 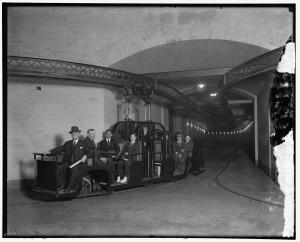 An interesting quirk of construction: the Senate and House lines don’t connect, but rather terminate at different points in the Capitol’s basement, and one must navigate a labyrinth of tunnels to travel between the two. Only the truly initiated can hope to do this without getting lost.

When I was on the Hill, there was no turntable for the rolling stock at each terminus, as the cars went back and forth on the tracks without turning around. Because of this relative simplicity, by 1993, the live train operators had gone the way of the dodo bird and the system became fully automated.

Back then, the public could just get onboard for the 1200’/ 52 second ride between Dirksen and the Capitol. Now anyone not an employee has to be escorted by a staff member with proper ID, so the Great Unwashed are no longer welcomed. And even with escort, during sessions, any rider not a Senator or Representative runs the risk of being bumped to facilitate The Elected getting to the chambers in time to cast critical votes.

I still remember vividly the wind whistling through my hair as the open-topped glass-sided cars whisked down the dark tunnel at top speed of 17 mph. 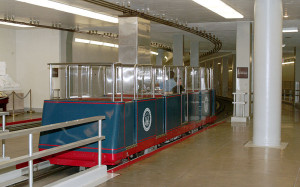 The subway I remember

And the subway isn’t the only odd thing in the Capitol’s basement.

Way back in 1860, given the muggy Washington summers and the lack of climate control – remember that the District of Columbia was originally a swamp that had been drained – it was decided by the Architect of the Capitol to install private baths in the basement of the building. Not just ‘regular’ bathtubs, mind you, but tubs stylishly carved into 3’ x 7’ cisterns from single blocks of solid Carrara marble imported from Tuscany. The Architect ordered six to be handmade in Italy and shipped over here.

Legend has it that elected officials could be banished from chambers if they stunk, followed by instruction to bathe and come back smelling better. The marble tubs in the basement weren’t only functional, though – they were also relaxing and luxurious, since even Senators and Representatives in antebellum days didn’t usually have running water at home.

With the coming of the Civil War, the tubs were soon forgotten. Only two of them are now extant, both on the Senate side, located deep in the bowels of the HVAC rooms downstairs. 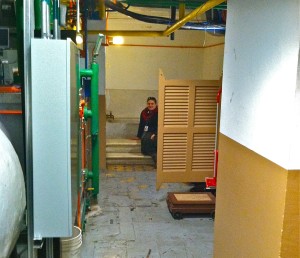 Leading Back to the Tubs

When I last saw the tubs, in 1980, they were still impressive, smooth and polished with fancy tile surrounding the steps leading up to each that hinted at the former grandeur of that private enclave. 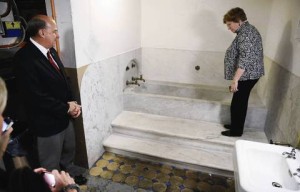 One of the Tubs

I’m glad I got to visit them when I did. I doubt, after 9-11, that curious interns can access the subterranean vaults any longer.