Recently, my elderly mother was relating memories of her nursing school training in the years after WWII at Toronto’s Western Hospital, in particular those of her psychiatric rotation. While I am not an apologist for Big Pharma, it does bear appreciating just how primitive were our collective ‘therapeutic’ interventions before Rx was widely available to address the most severe symptoms of mental illness.

There was not a psychiatric ward at the Western, so students were sent elsewhere for the rotation – across town either to the Toronto Psychiatric Hospital on Surrey Place, or to the Ontario Hospital at 999 Queen Street (aka “the 999.″) In mom’s case, it was to the latter. The cornerstone of the 999, at its opening known as the “Provincial Lunatic Asylum,” had been laid on 50 acres of an abandoned military camp in August 1846, and opened for patients four years later. Expanded over the decades, the facility had gone through several insensitive name changes by the time mom arrived, “Toronto Lunatic Asylum” and “Asylum for the Insane at Toronto” being two of the more palatable.

Mom was in nursing school in the late 1940s. Keep in mind that these were the years before Thorazine and the other antipsychotic tranquilizers were available. Benzodiazepines didn’t exist either. Lithium was known at that time to have calming effects, but would not come into widespread clinical use for another twenty years. The pharmacopoeia of the period essentially consisted of bromides, barbiturates, opiates, chloral hydrate, and paraldehyde – all indiscriminate sedatives with varying degrees of concomitant toxicity and addictive potential. All for which they were good was simple zombification of the agitated.

There were even more drastic interventions available, such as insulin coma treatments, ECT, and the lobotomy.

But surely there were therapies that were less draconian and more commonly employed on a day to day basis?

There were, and Mom remembers often being the student nurse assigned to monitor those in the hydrotherapy room. If the term ‘hydrotherapy’ evokes thoughts of Hollywood starlets lounging in scented spa waters, then you probably weren’t a mid-twentieth century psychiatric patient. In vogue starting in the late 1890s, hydrotherapy was premised on the belief that the application of hot and cold water to the disturbed could quickly produce beneficial results. Symptoms as varied as chronic insomnia, suicidality, agitation, hyperactivity, mania, and thought disorganization were all treated thus.

Though cold water immersion was used in some psychiatric wards elsewhere in North America, Mom’s experiences were with hot baths. The hydrotherapy room had soft indirect lighting and was warm and humid. Patients were restrained and placed in large stainless steel tubs, over which canvas covers were stretched and through which only the patients’ heads protruded. The afflicted were left in the baths for hours, or sometimes days, with breaks only to use the bathroom on a pre-set schedule. Falling asleep was encouraged, the goal of the baths being a diminution of restlessness and fulminate psychosis.

The bath water was typically maintained from 93°F to 99°F. Since the patients were often agitated, struggling, and yelling anyway, it was important to monitor the water temperature carefully so as not to mistake a patient screaming because of burning for one screaming merely because of mental illness. 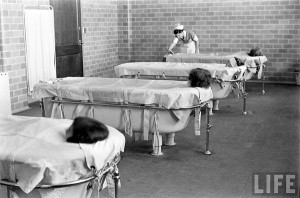 As a student nurse, mom was assigned to sit in the hydrotherapy room and four times an hour place a thermometer under each of the canvas covers and into the water to take a reading, being careful to stay away from the protruding (and often angry) heads. Temperatures were dutifully recorded, and if they were edging out of range, an actual nurse was summoned and the hot and cold flows adjusted accordingly.

I can’t imagine many teenaged students being given such vital and yet largely unsupervised duties in this day and age.

But water temperature was not the most consequential aspect of the psychiatric rotation in the eyes of a 19 year old. At the Western, meals served to those in training were congealed, cold, and hard. But at the 999, there was a cook behind the serving line who made the food to order, hot and fresh.

Baths or no baths, the students thought they had died and gone to Heaven.

I can entirely relate to this. I don’t remember much about my medical school interviews back in the 1980s, but I can still recall which admissions committees arranged for nice meals for us. I suppose that’s human nature.