Above-average intelligence and the ability to ‘think outside the box’ may in some cases be facilitated by recreational drug use. Proponents of substance decriminalization have held this, and while it’s an interesting hypothesis, it is not one without tremendous controversy and public health ramifications. Nevertheless, history illustrates a number of drug users who over their lives forged new and creative paths, whether related to chemical use or not.

One drug dilettante was none other than Sigmund Freud, originator of the concept of the subconscious and, amongst other honorifics, the Father of Psychoanalysis.

Freud was a trailblazer of his day, whether or not you subscribe to his approach to the human psyche. And he was also a big fan of cocaine, and advocated its use for a wide variety of conditions. 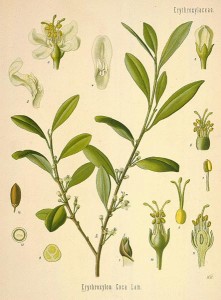 In a letter written to his fiancée Martha in 1883, Freud opined, “if all goes well, I will write an essay [on cocaine] and I expect it will win its place in therapeutics by the side of morphine and superior to it…. I take very small doses of it regularly against depression and against indigestion and with the most brilliant of success.”

Freud did in fact publish just such a review:

He began his treatise with a description of the South American coca plant, erythroxylon coca, which is a bush that grows to a maximum of 6’ height and has ovoid shaped leaves. Though cocaine was chemically isolated by Gardeke only as late as 1855, Freud noted that Andean natives were known to have used coca leaves as early as 600 CE when “faced with a difficult journey, when [attempting to satisfy] a woman, or… whenever strength is more than usually taxed.”

Freud postulated cocaine’s benefits for a host of conditions, including asthma, migraine headaches, indigestion, pain, and as a stimulant in wasting diseases. However, like most physicians of his day, he held that cocaine’s greatest therapeutic effects would be seen in psychiatry, in no small part because of the drug’s ability to control melancholia and sexual dysfunction. Interestingly, Freud’s paper was also one of the first to propose substitution as a therapeutic treatment for addiction. While replacing morphine or alcohol with cocaine is something we now know to be counter-productive to recovery, the concept of substitution persists to this day (think Methadone clinics, and Xanax detox using Klonopin).

It is true, Freud conceded, that there can be ill effects from over-use. Commonly were seen dry mouth, dizziness, elevated pulse, and oddly, eructation. Anorexia was also noted, though Freud hastened to add that survivors of the siege of La Paz in 1781 were those who had taken cocaine in lieu of food when there was nothing to eat. He did describe in some individuals a “moral depravity” that arises when these immoderate users become “complete[ly] apath[etic] toward anything not concerned with coca.”

Freud took cocaine himself about a dozen times, employing 50 mg orally on each occasion. Afterward, he claimed, he had no craving for the substance. As far as psychic effects, he did report exhilaration which was the same as the “normal euphoria of a healthy person.” He felt “more vigorous and capable of work,” but he said the overall feeling was “simply normal” and he found it hard to believe that he was under the influence of a drug at all. He did observe a lack of desire for both food and sleep for several hours after ingesting cocaine. Following several trials, he hypothesized that the psychological benefits of cocaine were not due to stimulating effects, but rather “the disappearance of element in one’s general state… which cause depression.”

Freud did not recognize the addictive potential of cocaine, in large part because it was believed in the 19th century that only depressants – morphine, alcohol, laudanum – were habit-forming. Most clinicians felt that cocaine was then better classified with caffeine.