Technology really is amazing, and the world, both socially and commercially, shrinks daily because of its effects, intended and otherwise.

A while back, I fell heir to a wonderful old camera. It wasn’t just any camera. It was a full-plate American daguerreian camera from the mid 1850s. Only a few in this size and of this age are know to still exist. 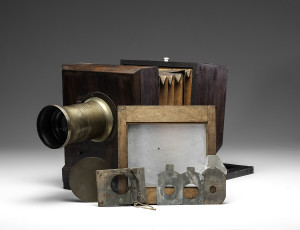 Louis-Jacques-Mande Daguerre (1787-1851) was a French artist who is recognized for developing the photographic process that bears his name. Daguerreotypes – not tintypes, which are far more common and date later in the century – were originally created using a copper plate that had been immersed in an electrolic silver bath. After the silver was applied, the plate was exposed to iodine and bromine to sensitize it, and then was polished to mirror-like quality. Once exposed, taking minutes not milliseconds, the plate was treated with mercury, sodium thiosulfate, and gold chloride to produce a silver-mercury amalgam on the mirrored surface, and thus a visible image – primitive and toxic, but effective.

My camera was made by W.H. Lewis in New York; the lens’ serial number indicated a manufacture date of 1857, making it one of the latter models employing this technology before daguerreotypy went obsolete.

As lovely and unique as was the camera, it was BIG, delicate, and difficult to store or display.

Plus, I needed the funds for servicing other debts. I made the decision to sell it.

Something this unique wasn’t going to sell by placing an ad in the local paper next to the high school sports section. Likewise, it was too large and fragile to mail to an auction house in New England or Manhattan, and I didn’t have the time to drive it all the way up there. So, eBay became my avenue for de-accession.

[don’t laugh – there are some really good items on eBay, this being one of them, but you need to have the patience to sort the wheat from the chaff]

I posted the camera as a ‘buy it now,’ with the disclaimer – in bold letters prominently displayed – that the buyer would have to pick it up. I wasn’t about to risk shipping. I was confident, though, that even with this stipulation, those who appreciate this sort of rarity would come out of the woodwork, and at least one would offer to make the journey to fetch a new treasured possession.

Little did I know just how far that one might journey.

Once it appeared on eBay, I rec’d a number of interested inquiries in the first few days.

“That’s an amazing camera! I’m interested. Will you ship to Idaho?”

“That’s a great camera! I’m interested. Will you ship to New York?”

“That’s an awesome camera! I’m interested. Will you ship to Arizona?”

“That’s a fantastic camera! I’m interested. Will you ship to Ohio?”

But before I could further lament the dumbing-down of America – “what part of ‘local pick-up only’ don’t you understand?!” – I receive an automated notice from eBay that the item had sold AND that I had already been paid!

Talk about speedy! I went to the website to find the buyer’s contact information so we could arrange to connect here in North Carolina.

It was then that I saw that the buyer lives in Seoul, South Korea!

Exasperated, I wrote to the buyer to explain, once again, that ‘local pick-up only’ meant just that!

To my utter amazement, he wrote back and said he was going to fly to the US to pick it up himself! I would have thought that this was an internet scam, except the full purchase price had already been deposited into my account, free and clear.

It turns out that the buyer was none other than Professor Lee Juyong, a renowned international artist and academician. His works – which span daguerreotypy to holographic images – are exhibited currently at the Pyo Galleries in Seoul, Beijing, and Los Angeles. He has also exhibited in the Phillipines

as well as Nepal, Taiwan, Japan, India, and Austria.

When executing works using archaic technology – daguerreotypes, for example – Professor Lee uses the actual tools and chemicals of the era. Here, for example, is a haunting image of a young woman, done by daguerreotypy and appearing to be from the mid-19thc, but instead dating from only a few months ago. That’s why he wanted my camera; he actually intends to USE it! 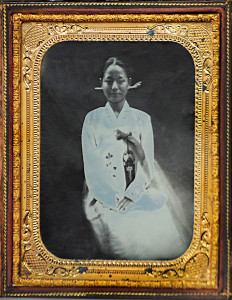 an example of Lee’s work

His exhibit at the National Museum of Korea, entitled ‘Memory Of The Moment,’ opened last September, and he told me that he wants to do some restoration to the bellows of the camera, and then display it there.

Intrigued, and amazed at the distance that Juyong was willing to travel, I agreed to meet him in DC to deliver the camera (I think a trans-Pacific journey negates strict adherence to the ‘local pick-up only’ stipulation)

The day of his arrival dawned, and I headed off for DC, camera boxed but not sealed (as I knew that he’d need to show it to customs and security). I worried that there would be some travel glitch at the last minute. But there wasn’t… we found each other right outside of the National Gallery of Art on the Mall. Total strangers from 10,000 miles apart, we shook hands, took a quick selfie, and I handed over the box. He graciously thanked me and gave me a copy of his exhibition book.

And then he was gone. And my erstwhile camera is now in a museum exhibit in Seoul.