Originally called the Hotel des Anglais upon opening in the early 1840s, the premiere inn of Cairo, Egypt, had been renamed the Shepheard’s Hotel after its then-owner, Englishman Samuel Shepheard, by the 1860s. It was famed for its grandeur and opulence, though a frequent complaint – one of its very few – was that its cuisine “le[ft] much to be desired.” Extensively renovated in 1891, 1899, 1904, 1909 and 1927, it survived both WWI and WWII – during the former, it served as the HQ of the British Near-East Command, while during the latter, it housed offices of the U.S. State Department and OSS, foreign press wire services, the Greek government-in-exile, and Gen’l Bernard Montgomery’s staff.

Many famous figures, including Lawrence of Arabia and Lord Kitchener, were frequent guests.

An American official wrote this of the Shepheard’s after his visit in late 1943: “‘Famous’ is not adequate to describe all the unique wonders of the hotel. Its large front terraces where everyone met during the day for tea or cocktails faced the busiest street in Cairo, and it was oft-said that if you stayed on the terrace long enough you were bound to meet someone you knew. In the back of the hotel there was a beautiful flower garden filled with roses and exotic plants. Next to the garden, the Shepheard’s had its own little zoo. Of course, there was a camel or two, and several young Arabian horses… but the zoo director’s favorite animals were his gazelles. He had at least twelve of them and he claimed that they were the most elegant and graceful on earth. These gazelles were quite tame and a delight to children who petted and played with them…. [Also] outside your room’s door [or just down the hall] were [stationed attendants which] the British called the ‘Nubian slaves.’ They weren’t slaves at all, but usually very large [liveried] Africans [who performed as butlers and] gave you confidence in the security of the hotel. My Nubian… was named Ulysses and I never did find out how he got that name.”

[sidebar I: the Shepheard’s check-room was renowned for keeping personal items long after guests had left, assuming they’d come back eventually to retrieve. One tale, apparently true, is that Winston Churchill left a small package there in 1918, and retrieved it, dusty but unopened, in 1943]

[sidebar II: there was also the famous hotel bar, just off the lobby, at which was reportedly invented the S&B cocktail, favored by combat aircrews on leave. ‘S’ and ‘B’ purportedly stood for ‘Suffering Bastard,’ and it was claimed that three of the brandy-based drinks would make you forget entirely about the war and not give a damn about anything]

[sidebar III: the Grand Hotel des Bains on the Lido in Venice, standing in for the Shepheard’s, was the backdrop for at least one scene in The English Patient (1996) – this because the two hotels are of similar age and appearance]

Another visitor to the Shepheard’s, arguably less famous, was my father, then a captain and flight surgeon in the 34th bomb squadron, 17th bomb group, 15th Air Force. Dad was never much of a talker, so the details are long lost. But while stationed in either Tunisia or Sardinia with the USAAF, he was given the opportunity to go on R&R in Cairo, and he accordingly stayed at the Shepheard’s – room no. 61, to be exact. 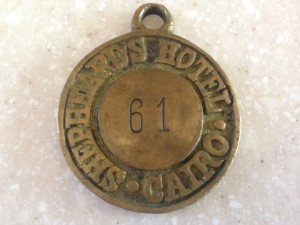 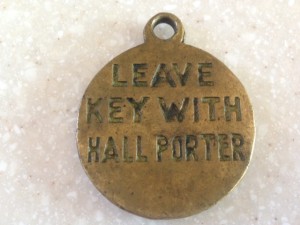 I know the room number because he ‘forgot’ to return the room key when he checked out. Though the key itself is long lost, I still have its heavy brass fob. I’ve searched the Internet high and low, but have been unable to find anything similar. Given that the hotel and all of its contents were burned to the ground in anti-British riots in 1952, I suspect this fob may be one of few, if any others, extant today.

And no word if Dad had an S&B while a guest.