The following is a true story. Some may find it distasteful, unprofessional, unethical, and all of those other ‘non-PC’ adjectives. I offer it without commentary, merely to illustrate the lengths to which overworked, exhausted, and stressed people will go in their attempts at self-preservation.

While a senior medical student at UVa, I did a six week stint as an acting intern at the Medical Center of Louisiana at New Orleans – you know it as Charity Hospital. 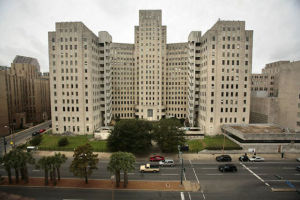 Even in those pre-Katrina days, Charity was at baseline a chaotic zoo. The currently extant but abandoned Art Deco building, constructed in 1939, was at its opening the second largest hospital in the U.S., with over 2600 beds. It was so large that it hosted students and residents from not one, but two, medical schools (LSU and Tulane). I was with the former, on the pulmonary service.

In 1988, we used to say that Charity offered “state of the art medical care… from 1940.” That wasn’t entirely inaccurate. While the trauma unit was well known and highly regarded because of the constant stream of knifings and gunshot wounds that showed up on the doorstep, other aspects of the physical plant left much to be desired. For example, on the pulmonary service where I worked, those with TB were put in ‘isolation,’ which in Charity parlance meant pulling a floor-to-ceiling curtain all the way around their bed. No joke. We’d be rounding past patients coughing and hacking with nothing but a gossamer-thin curtain between us. Today, such patients are put in sealed rooms with negative pressure airflow, but back in the 1980s, the curtains were the best that Charity could offer. It’s a miracle that I never seroconverted.

[gross humor sidebar: the house staff referred to the 24-hr cafeteria in the basement of Charity as “the fistula” because “it’s always open.” If you don’t get the medical double-entendre there, look up the definition of ‘fistula’]

Anyway, there was a senior resident at Charity whom I knew – let’s call her Dr X – who found herself one night in a particularly difficult bind. She hadn’t slept in ages (these were the days before there were rules about how many hours a resident could work without a break). She hadn’t eaten either, and she had ten admissions waiting to be seen. It was after midnight, and the pager kept urgently demanding attention for all of the new problems on the inpatient wards.

And then Mrs Y died. Dr X went to see her and she had expired. She was elderly, very ill, and death was not unexpected, as she was DNR (no-code). Still, this came at the worst possible time for Dr X. Stopping to do the death certificate and all of the related paperwork would have set her even further behind answering pages and seeing new admissions (forget about eating and sleeping).

In Charity Hospital in those days, there were few orderlies available, so most times the residents themselves hauled patients onto gurneys and transported them wherever they needed to go within the complex. It was hard physical labor, but often a better choice than calling and waiting for an orderly who might never actually arrive.

Then, with apologies to Dr Seuss and the Grinch, “[S]he got an idea. An awful idea. [Dr X] got a wonderful awful idea.”

Mrs Y had not been dead for long. She was a small woman. Dr X moved her onto a gurney with a pillow, covered her with a blanket, and wheeled her along the darkened labyrinthine halls and onto an elevator. It was in the wee hours of the morning and there were few people around. She took the elevator down to radiology and pushed the gurney to xray. She quickly completed a request form for a chest film, tucked it under the pillow, and left Mrs Y on the gurney outside the radiology suite along with several other patients who were lined up for studies. All was quiet. Dr X returned to the ward to answer pages and see new admissions.

Within the hour – now pushing 3:00 a.m. – Dr X rec’d a page from radiology. The technician’s voice on the other end of the line said, “Dr X? I’ve got some bad news. You ordered a chest xray on Mrs Y a while ago, but she has died. I’m really sorry to report this.” A brief moment of silence was then followed by, “Dr Z [the radiologist] will take care of the paperwork down here.”

Which was exactly the plan all along. Mrs Y went to her reward, and Dr X lived to fight another day.