When I started my training in the mid-1980s, there were still nurses working at the medical center who remembered early in their own careers keeping a refrigerator on the ward that was filled with cans of beer, which the docs would prescribe for patients who were undergoing alcohol withdrawal. Prescribing beer would allow a gradual taper of their daily consumption, and would prevent their going into full-blown delirium tremens while inpatient.

Prescribing beer worked just fine in avoiding DTs before benzodiazepines were available. But it also represented a throwback to a time when medicinal use of alcohol was not nearly so innocent and altruistic.

In my post from last week on cresol, I made the observation that “if one presumes that humankind’s search for euphoria and an altered state of consciousness is not going to vanish anytime soon, then substance abuse is a problem that is here to stay.”

For this reason alone, it should have been painfully evident to policymakers that the 18th Amendment to the U.S. Constitution, enforced by the National Prohibition (Volstead) Act, was doomed to failure.

For thirteen years starting on 16 January 1920, there was a ban on the production, sale, and distribution of alcohol in the United States. But like most futile social policies, there were legal loopholes, plus illegal ways to circumvent the law, that were big enough through which to drive a Model T delivery truck. Farmers, for example, were allowed to grow grapes and produce wine (up to 200 gallons per growing season for their own consumption) under the guise of “preserving fruit.” Rabbis and priests could obtain wine, and congregations could partake, during religious ceremonies.

And physicians (as well as dentists and veterinarians) were allowed by the Treasury Department to prescribe alcohol for ‘medicinal purposes.’ Over 15,000 physicians applied for this privilege in the first six months of Prohibition alone. Having added special licensure allowed physicians to write up to 100 prescriptions for medicinal alcohol per month – a numerical allotment that was rarely if ever underutilized. Hooch was accordingly used to ‘treat’ a variety of ailments, including cancer, asthma, difficulty with lactation, diabetes, poor circulation, snakebite, anemia, typhoid, pneumonia, tuberculosis, coronary artery disease, high blood pressure, indigestion, depression – even the wonderfully vague and non-specific ‘old age.’ And if alcohol wasn’t listed as treatment for one’s ailment-du-jour, booze was still often used as a vehicle by which to ease the ingestion of other medications, as it tasted better than many pharmacy preparations.

So much for bubble gum flavored cough syrup. 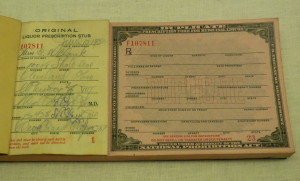 Pharmacies were required to apply to be alcohol-dispensing entities. Some states were stricter than others, but especially near the Canadian and Mexican borders, and on the coasts, rules were often more lax and supplies were vast and difficult to control – pharmacies had no trouble keeping firewater in stock and their ‘sickly’ customers supplied. Prescriptions were filled for spiritus frumenti, or spirit of the grain, the term of art by which most physicians documented the necessary libation. Patients would quickly take such a prescription – they expired after three days – to a pharmacy and request the type of liquor they desired: gin, rye, scotch, whatever. Toward the end of Prohibition, when the sham was so obvious that hardly anyone even cared, more than a few pharmacies were actually filling prescriptions for champagne. And while some druggists only carried cheap alcohol better suited for cleaning, and often watered it down, it was apparently not rare that alcohol handed over the counter was brand name stuff like Jack Daniels in recognizable trademarked bottles – as long as it had a label affixed that said, “for medicinal purposes.”

Anyway, doctors were supposed to be examining and diagnosing patients before any prescriptions were dispensed, but that stipulation was largely flouted. Every ten days, a patient willing to cough up the cash for a rote office visit could walk out with prescription-in-hand and shortly thereafter, down the street, head home with a pint of booze. There might have been some people who were given the tipple for actually-perceived medical need, but the whole process really just became a means by which physicians and pharmacists could earn a few extra bucks during hard times.

Doctors’ instructions varied, but generally they advised their patients to imbibe an ounce of alcohol every few hours or a tablespoon three times a day. One of my favorites was from a prescriber in Detroit in 1926: “take three ounces every hour for stimulation until stimulated.”

Those not even in the medical profession took notice. Bootlegger (and lawyer) George Remus incorporated a sham business entity called the Kentucky Drug Company. As a licensed supplier, this front allowed him to legally obtain and transport alcohol in company trucks to pharmacies all over the Midwest and South – that is, when he didn’t have his men hijack his own trucks en route and then divert the contents to speakeasies nearby.

The farce finally ended when Prohibition was repealed by the 21st Amendment on 5 December 1933.