Ever watch youngsters spin themselves around in a circle to induce vertigo? What is the first thing that the kids do? I mean AFTER falling down? That’s right… they usually burst into laughter. Anyone who has had children will recognize this phenomenon and realize that it’s pretty universal.

Erasmus Darwin (1731-1802) had noted this sort of behaviour also. Though not as famous as Charles, his arguably better-known and -regarded grandson, Erasmus Darwin was a physician, philosopher, scientist, and minor celebrity in 18th century Staffordshire, England, but for less-auspicious reasons; despite having once been offered the position of personal physician to George III, he wasn’t particularly adept at any of his vocations.

He documented many of his disorganized and far-fetched ideas in bad verse. Here’s a sample prelude from one bloviation on the origins of life:

“By immutable immortal laws,
impress’d in nature by the great first cause…
say, Muse! How rose from elemental strife
organic forms, and kindled into life?”

This might be one reason his proposals weren’t always taken too seriously – being flaky could have been another.

Anyway, Darwin believed that spinning a person around not only induced slumber (?), but also laughter, and that this soporific/ mirthful combination was a great way to resolve mental illnesses and whatever else might ail you. The treatment was performed in one of two ways:

1. an ordinary chair, suspended from the ceiling by a swivel, was spun by hand, or
2. a pole with a horizontal metal arm was installed from floor to ceiling, and from the arm was suspended a chair that was spun around the pole. 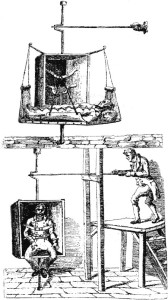 The treatment was to be continued until the patient improved, or else promised to obey the doctor’s orders and get better, at which time he would be released from the spinning device and allowed to go back to his room and get some sleep. Contemporary sources noted that side effects of this protocol included anxiety and fear; nausea and vomiting; an ashen complexion; vertigo; sedation; and sudden bowel movements.

This would have gone nowhere except for the equally surprising fact that no less a personage than Benjamin Rush, M.D., signer of the Declaration of Independence and the man considered the Father of American Psychiatry, believed there might be some merit to the approach. Rush opined in his letters that spinning reduced brain congestion (?) and was thus therapeutic.

In actuality, all that Darwin and Rush produced were mentally ill patients who were then dizzy.