I have visited many American military cemeteries over the years, and I have always found them to be beautiful and humbling places. They are quiet and dignified edens wherein lie the honored dead who have defended the nation.

There is one cemetery, though, that doesn’t quite live up to this archetype.

Plot E of the Oise-Aisne American cemetery in northern France.

Go ahead and look. You won’t find it listed on the Veterans Administration website, nor any of the literature provided by the cemetery. Maps will show Plots A, B, C, and D only, those containing 6012 American dead from WWI. Google Earth will just show an expanse of green. It’s like it doesn’t exist, which is exactly what its creators intended.

But it’s very much there, and serves a necessary if somewhat unsavory purpose.

Plot E is where American servicemen are buried who were executed – by firing squad or hanging – for capital crimes committed in the European theatre during or shortly after WWII. Some of the victims were children. Many were women. Most are forgotten by the modern age, though at least one – Sir Eric Teichman, killed on his ancestral estate confronting two U.S. soldiers poaching on the land – was a prominent member of society who still has his own Wikipedia page.

Those capital crimes once included aggravated rape, murder, and desertion, though currently none interred in Plot E are deserters. More on that in a moment. 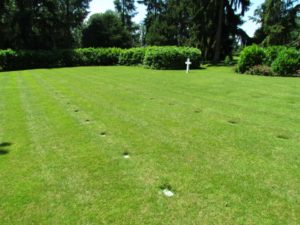 Plot E is located 100 meters from the main cemetery, and contains the remains of 94 servicemen. It is across a small road and deliberately hidden from view by a tall border of hedgerows that surrounds the 90′ x 50′ oval space. Because of the dense shrubbery, and the fact that there is no path nor gate, the only access to the area is through the back door of the cemetery superintendent’s office… and this is highly discouraged. There are no gravestones, nor any plaques with names – the graves are designated by white index-card sized stone markers with stark black numbers, in four rows, and all facing away from the recognized burial ground nearby. Plot E has been described by one cemetery employee as a “house of shame” and “the perfect anti-memorial,” esp as the original intent was that none of the individual remains were ever to be identifiable by name (it was only after a Freedom of Information lawsuit in 2009 that a list of grave numbers and occupants was released to the public). No U.S. flag is allowed to fly there, although there is a single small granite cross to one side. Nevertheless, it is maintained, with grass being cut and hedges trimmed, perhaps more for the aesthetic sensibilities of the superintendent than due to any niceties afforded the deceased. 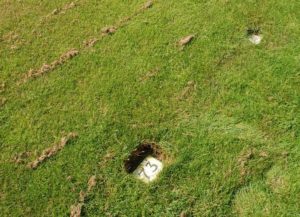 Originally, the 98 condemned by the U.S. Army following general courts martial were buried near the sites of their executions, which took place at locations as far-flung as England, France, Belgium, Germany, Italy, and Algeria. In 1949, however, it was decided to relocate all such remains to a single venue; that site is described by the Graves Registration as being for “the dishonored dead,” since, according to protocol, all had been dishonorably discharged from the service just prior to execution.

For reasons unclear, two of those executed during the 1940s never were sent to Plot E. Two others were buried there but later exhumed and returned to the United States. One of those was Private Alex F. Miranda, who came back to the U.S. in 1990, though details of the transfer were never made public.

The second was the former occupant of Row 3, #65, Private Eddie Slovik, the only man executed during WWII for desertion. His later became a cause celebre, as other soldiers deserted during the war, but Eisenhower decided to make a sole example of the rough street kid from Detroit on 31 January 1945. His remains were finally returned to the U.S. on order of President Reagan in 1987, and rest today at Woodmere Cemetery in the city of his birth, next to the grave of his wife.