In writing this post, I tip my hat to two authors, the works of whom I admire: Bess Lovejoy, who wrote Rest in Pieces: the Curious Fates of Famous Corpses, and Colin Dickey, who brought forth Cranioklepty: Grave Robbing and the Search for Genius. These tomes, far more than anything in formal medical training and experience, opened my eyes to the fact that there are a lot of bodies out there who are missing their heads.

In the spirit of cooperation, I’d like to add yet another name to history’s decapitated roll call.

Any student of neurology or psychology has heard of Phineas Gage. An otherwise unremarkable 19th century laborer, Gage has earned eternal notoriety, not for his professional competence, but for an accident he did not anticipate and the consequences of which he could never have imagined.

Gage was born in 1823, the first of five children to Jesse Gage and his wife Hannah, in Grafton, New Hampshire. Little is known of his childhood, but it is suspected that he gained experience with explosives as a youth at mines and quarries near the family farm. He later went to work as a foreman on railroad construction projects in New England. His employers considered him “the most efficient and capable…. [v]ery energetic and persistent in executing all his plans of operation.” Gage, it is said, even had a tamping iron custom made to specifications for his work with explosives; this iron, a sturdy rod 3’7” in length and 1.25” in diameter, was used to set charges along the right-of-way during construction.

Little did Gage realize that his custom iron rod would be his lifelong companion in a manner far different than that originally intended.

On the day in question, 13 September 1848, Gage was working with his crew on the Rutland & Burlington Railroad near Cavendish, Vermont. They were blasting rock to prepare the roadbed for the laying of rail. Setting an explosive charge involved boring a hole deeply into the rock, adding blasting power, a fuse, and sand, and then compressing the charge in the hole using the tamping iron. Around 4:30 p.m., Gage was doing this for one of the day’s last charges – perhaps he was getting tired toward the end of the shift? – when the powder detonated prematurely. The tamping iron rocketed out of the hole and like a javelin penetrated the left side of Gage’s face, passing in back of his left eye, and exiting the top of his head (the iron, weighing over 13lbs, was later found 90 feet away, “smeared with blood and brain”). Gage was thrown on his back and convulsed. All those present said later that they were certain he was dead. But within a few minutes, accounts agree, he was able to speak coherently, and he was then transported to his lodgings in town, almost a mile away, by oxcart. 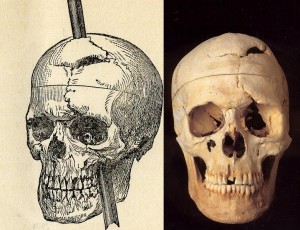 The first physician to reach him, a Dr. Edward Williams, arrived at his bedside less than an hour after the accident. Dr. Williams said he could see the pulsations of Gage’s brain through the exit wound. Gage then vomited, and Williams noted that expelled from the exit wound was “a half teacupful of brain which fell upon the floor.” For three weeks, Gage went in and out of consciousness as his friends and family kept vigil, expecting his passing at any moment. A coffin and burial clothes were kept nearby. But by November Gage was able to walk short distances with assistance, and he then returned to his parents’ farm to further convalesce.

Gage lost vision in his left eye and had left sided facial paralysis as well, plus considerable scarring. Yet he survived a grievous head injury in pre–antibiotic and –neurosurgery days, a trauma that would challenge a 21st century physician and ICU. It was a wound that one of his attending physicians at the time called “the case which more than all others is calculated to excite out wonder, impair the value of prognosis, and … subvert our physiological doctrines.” It was a rare clinical situation which could have provided his doctors an unparalleled chance to study the function of the human brain theretofore unknown and mysterious.

Gage lived for a dozen years after the accident, eventually working in a livery, as a farmhand, with Barnum’s American Museum (as an exhibit), and even as a stagecoach driver at one point. He is said to have been able to perform most tasks with in a structured environment. But even though he regained basic social and employment abilities, friends and family said he was “no longer Gage.” 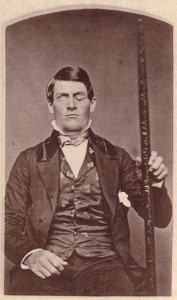 But to what extent was he “no longer Gage”? A latter-day rhyme opined that,

A moral man, Phineas Gage
Tamping powder down holes for his wage
Blew his special-made probe
Through his left frontal lobe
Now he drinks, swears, and flies in a rage.

Though Gage’s has been held as the index case regarding personality changes following frontal lobe trauma, its scientific value is compromised by the uncertain extent of the brain damage and the small amount objectively documented in detail about the changes. Instead, psychologist Malcolm MacMillan writes in An Odd Kind of Fame: Stories of Phineas Gage, that the story “is primarily worth remembering because it illustrates just how easily a small stock of facts becomes transformed into popular and scientific myth.”

Modern writers and urban legend often portray the post-injury Gage as a restless, profane, irritable, and unpredictable psychopathic lout, unable to hold a job, who then becomes a drifter, dying in penury. This exaggerates the behavioral changes far beyond that written by anyone who actually knew and interacted with him. What real value could have been gathered from study of Gage’s recovery was lost by the lack of detailed documentation, and the absence of imaging and neuropsychological testing, still decades in the future. Dr. John Harlow, one of Gage’s attending physicians, only hinted at non-specific neurological changes in his patient, saying, “the mental manifestations… I leave to a future communication [as this] case is exceedingly interesting to the enlightened physiologist and intellectual philosopher.” The Chair of Harvard’s surgery department at the time, Dr. H.J. Bigelow, went so far as to later state that Gage was “quite recovered in faculties of body and mind,” there being only “inconsiderable disturbance of function” to show for the injury.

Still, studying the post-accident course of a man so seriously maimed yet alive was an opportunity for scientists and physicians to at least start thinking about the brain and what parts govern which aspects of function and personality.

What is not debated is that over the years, Gage’s seizures increased, and he began to experience grand mal events that were longer and more frequently. He died in status epilepticus on 21 May 1860, and was buried in Lone Mountain Cemetery just outside of San Francisco.

And so the story ends. Not.

“It is regretted that an autopsy could not have been had so that the precise condition of the encephalon at the time of [Gage’s] death might have been known. In consideration of this important omission, the mother and friends, waiving the claims of personal and private affection, with a magnanimity more than praiseworthy, at my request have cheerfully placed his skull (which I now show you) in my hands, for the benefit of science. I desire, here, to express gratefully my obligation, and those of the profession, to D. D. Shattuck, brother-in-law of the deceased [and others] for their kind cooperation in executing my plans for obtaining the head and tamping iron, and for their fidelity in personally superintending the opening of the grave and forwarding what we so much desired to see.”
~Harlow (1868)

Dr. Harlow had learned years later that his famous former patient had expired on the west coast. The doctor immediately took to corresponding with Gage’s family, and with chutzpah unthinkable to 21st century mores, asked for the body to be exhumed and the desired specimen brought back east. With the family’s permission, Gage’s grave was indeed opened seven years after interment and his skull was removed – along with the tamping iron, which had been buried with him. Both items were shipped to New England and personally presented to Dr. Harlow.

The skull and iron remain on display in the Warren Anatomical Museum of Harvard’s medical school to this day. The rest of Gage is still in California.