‘Mummy Brown,’ also known as ‘Egyptian Brown’ or ‘Mummia,’ is a rich dark earth-tone pigment, somewhere between burnt and raw umber, commonly used by artists starting in the 16th century. And yes, it’s called Mummy Brown for a reason.

It was made from mummies.

The color comes not from the dead body per se, but from the bitumen and asphaltum resin that the ancient Egyptians used in the embalming process. Renaissance artists believed that when pigment from mummified flesh was used in paintings – along with the inevitable bits of ground-up bone – the resulting compound had more solidity and wouldn’t later crack or chip. 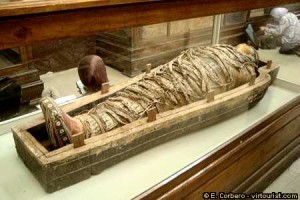 [this was later shown to be wholly inaccurate… though Mummia had good transparency and could be used successfully for glazes, shadows, and flesh-tones, it did have a tendency to craze, as well as alter other nearby colors because it contained both ammonia and fat]

Entrepreneurs being as they are, when genuine dead Egyptians were not available, hucksters would supply faux-Mummia, made from Egyptian cat mummies (best case) or any old human corpse lying around (worst case). Artists sneeringly referred to such cheap imitations as ‘Mummia Falsa.’ In 1915, one London colourman, touting the quality of the real thing, claimed that he could satisfy the demands of his customers for twenty years from a single genuine Egyptian mummy.

But once the Edwardians learned of the macabre source, Mummia started its fall from favor. Some artists held (mock?) funerals for their tubes of paint. And yet the need for the shade didn’t go away. As late as 1964, TIME reported that one of London’s best-known art suppliers, C Roberson & Co, had stopped selling Mummy Brown. Geoffrey Roberson-Park, then managing director of C Roberson, is quoted in the article as having said, “we might have a few odd limbs lying around somewhere… but not enough to make any more paint. We sold our last complete mummy [a while back].”

So Mummia Falsa was resurrected; it was false, not in the sense that it was made from dead cats or ordinary corpses in lieu of ancient human ones, but rather because it wasn’t made from dead tissues at all. You can still purchase variations of Mummy Brown in art supply stores, except that it is now composed of kaolin, quartz, goethite, and hematite, and ranges from yellow to dark red (the latter being called ‘Mummy Violet.’)

And it’s not just for art anymore.

Mummia was used as a medicinal preparation – it was for sale in Merck’s pharmaceuticals catalogue as recently as 1908. But more on that later.