One of my cousins lives in Ottawa and is a flight attendant for Air Canada. As such, she gets to visit some pretty cool places, and she has agreed to periodically guest blog when she has an interesting story. Here is her first, in part, from a recent trip to Italy…

Carnevale in Venice is something like New Orleans’ Mardi Gras, only with class. Costumes (and there are many) are mostly 18th century in style. For those of you who remember Heath Ledger’s movie Casanova, that is a very accurate portrayal of the flavor of Carnevale, at least what I observed. In addition to exploring the city, my friends and I one evening attended Verdi’s La Traviata, performed in a 16th century palazzo on the Grand Canal (the building happens to be for sale, for only $9,000,000 for those of you who might be interested). And though I’ve been to Venice several times before, we did all the usual touristy things, like having our pictures taken on Rialto Bridge, buying souvenir masks, and taking a gondola ride during our lay-over.

About that gondola, it was pretty amusing, but not for the reasons you might expect. We caught a gondolier on his way home at 9:00 p.m., and he agreed to give us a cut-rate ride (probably because it was on his way home anyway and he figured, “what the heck, I’ll make some extra money for doing almost nothing.”) I didn’t know about chartering a gondola after dark, but it was great! Three of us piled in, and before long we were gliding along deserted canals. The only sounds were the gentle lapping of the boat’s wake against building walls, and the occasional call from the gondolier as we rounded blind corners to make certain we didn’t run into another near-silent gondola coming from the other direction. Remember that there are no headlights on these black-lacquered missiles, nor are there streetlights over canals. It was totally peaceful and quiet. No one was talking. We were just basking in the calm and silence. And it was dark. Really dark.

All of a sudden, there was a jarring noise that pierced the night like a siren. Just as happens when your clock’s alarm goes off early in the morning, you vaguely recognize the sound in your brainstem, but it takes a few seconds for your mind to wake up to the point that you can process and identify it. My brain immediately recognized this blast, but for a few seconds, I couldn’t place it in context. And then it hit me – it was the gondolier’s cellphone! He was guiding us down silent 16th century canals in the dark, and now was talking to his girlfriend about groceries, her day, what to bring home, &c.! 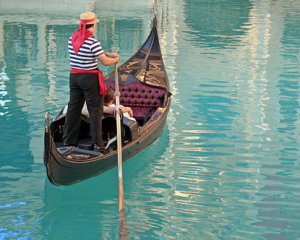 I had to laugh, because even in Venice at night on the canals, the 21st century intrudes in very unexpected ways.

Think of that the next time you see someone cruising down the QEW gabbing on the phone and driving with one hand. The gondolier was doing the same thing, just 75 kph slower, on water, and without rear view mirrors!