Later this week – on April 14th and 15th to be exact – 102 years will have passed since the sinking of RMS Titanic in the cold waters of the North Atlantic. Over 1500 souls were lost that night.

Just as there are celebrated cases of individuals on September 11th, 2001, barely missing their subway or commuter van en route to the Twin Towers, or being late for their United Airlines or American Airlines boardings, so there are several stories of those who didn’t make Titanic’s sailing… arguably the most fortuitous tardiness or change-of-plans of their lives.

J. Pierpont Morgan missed the boat when he lost track of time while lounging in a French spa (some have postulated brothel);

Alfred Vanderbilt cancelled at the last minute (though he later perished on RMS Lusitania);

Guglielmo Marconi’s schedule didn’t permit his passage on the maiden voyage, but he accepted a company raincheck for Titanic’s second scheduled crossing;

Nobel Laureate J.R. Mott was likewise offered a free stateroom, but decided against it for reasons unclear. 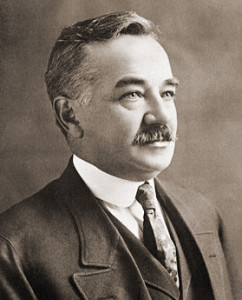 The easily recognizable name of yet another lucky individual is that of Milton Hershey, founder of the Hershey Chocolate Company. Fabulously wealthy, in December 1911 he had paid a $300 deposit (almost $8000 today) for a stateroom on Titanic’s westward crossing, as he and the missus were to spend four months in Europe on holiday and would be returning by mid-April.

However, Milton’s wife Kitty was in notoriously poor health, and there were pressing business matters at home, both of which necessitated the Hersheys returning to the States from their extended jaunt earlier than planned. They lost their deposit to the White Star, instead sailing on the Hamburg-America Line’s Amerika several days prior.

Ironically, Amerika passed through the same waters that Titanic would later be sailing, and sent word back that there were a few treacherous-looking icebergs along the way. Obviously, the warning wasn’t heeded.

Interestingly, the Hershey archives still retains their founder’s cancelled deposit check, made out to the White Star Line.