[the Alienist won’t be wordsmithing much for the next week, and is recycling past materials; this originally was posted in late 2012, but some interesting add’n information has been added for your enjoyment]

Consider Room H-235, located next to Statuary Hall in the U.S. Capitol. H-235 is now known as the Lindy Boggs Reading Room, named after the prominent female representative from Louisiana in the 1970s and 1980s. That so-called reading room is what has been called by media outlets, “the only bipartisan meeting space in the Capitol building solely for female members,” and “America’s most powerful ‘powder room.'”

You see, it’s the House’s first ladies’ restroom, borne out of necessity as the number of female reps grew to double digits after WWII. Despite their growth in numbers, for years there had been no designated loo for the women. The Boggs Room with its two stalls (!) was set aside for its intended purpose only as recently as the 1960s (its name came later). And today, with 79 female reps, it’s a bit cramped in there.

And it isn’t even all that close to the House chambers, being at least a five minute walk through throngs of camera-toting tourists.

Building a new ladies’ restroom was at first considered too expensive. Since the Capitol is a (protected) historic edifice, plumbing would have had to be circuitously rerouted to avoid rare architectural features and wall murals, the cost of which was estimated at the time at many hundreds of thousands of dollars.

Before long, though, the (male) House leadership had to grudgingly pay up. So now there is also Room H-211, inside the Speaker’s Lobby and much closer to the House floor. As of July 2011, it sported four add’n stalls and two sinks.

Whom, you might ask, do we have to thank for all of this?

None other than Rep. Jeannette Rankin (D-MT), the first woman to be elected to the House, and (somewhat infamously) the only dissenting vote for declaring war against Japan following Pearl Harbor. 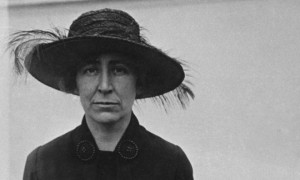 It wasn’t that she forgave Japanese treachery, but rather that she believed Roosevelt had provoked the Pearl Harbor attack as a way to get involved in the European theater of war as well. She wasn’t about to cooperate with his perceived subterfuge.

Rankin was not only a lifelong pacifist, but amazingly is the only member of Congress to cast ‘nay’ votes against declaring war in both WWI and WWII. Although some male colleagues had joined her in voting against WWI in 1917, most political observers saw her votes as evidence that women just could not be entrusted with the difficult decisions necessary for leadership on a national level.

Though Montanans voted her out of office in 1919, they reelected her to the House in 1940, unknowingly just in time to cast that second and sole ‘nay’ vote.

When the 1941 crowd outside the House learned of her ‘nay’ vote, some threatened “to get her.” Rankin had to hide in a telephone booth – not the restroom – and call the Capitol police to escort her to safety. She was regularly vilified in the press – usually called “Japanette Rankin” – but yet stood her ground and never apologized for her votes.

Still, she was fully aware that she had committed career suicide. She chose not to run for reelection in 1942.

As a private citizen, she continued to be an active advocate for pacifism, and led a campaign against the Vietnam War in 1968 when she was in her late 80s.

She was considering yet another run for office in her early 90s because of the growing involvement of the United States in southeast Asia. However, she died in 1973 at age 93 before declaring her candidacy.

Her likeness was then placed in Statuary Hall of the U.S. Capitol twelve years later.