Over his professional life, Daniel Sickles (1819-1914) was both a House Representative and Senator, the U.S. ambassador to Spain, and a controversial general in the Union Army during the Civil War. Less known is how Sickles shot to death the district attorney of Washington DC, one Phillip Barton Key (son of Francis Scott Key of ‘Star Spangled Banner’ fame)… and got away with it based on a novel legal defense.

Sickles married his wife, Teresa, in 1852 when he was 33 and she was just 21. He proceeded to have numerous extramarital affairs, but became incensed when rumor reached him that his neglected spouse had herself taken the younger Key as a lover. He confronted her and forced her to write a confession:

“I have been in a house on Fifteenth Street [in D.C.], with Mr. Key. How many times I don’t know. I believe the house belongs to a colored man. The house is unoccupied. I commenced going there the latter part of January. I have been alone with Mr. Key. We usually stayed an hour or more. There was a bed on the second story. I did what is usual for a wicked woman to do… an intimacy of an improper kind.” She acquiesced to her incensed husband’s demands to cease such behavior.

But on 27 February 1859, Sickles learned of Key’s attempts to contact his wife yet again. He accosted the would-be Romeo in Lafayette Park, just across from the White House. Twelve witnesses later reported that Sickles yelled at Key, “you scoundrel… you have dishonored my home, and you must die!” A pistol was flashed. The first shot fired by Sickles missed, and Key threw an object at his attacker (later determined to be a pair of opera glasses that Key used to see if Mrs Sickles had left him a signal). The fight became hand-to-hand, but Sickles pulled out a second pistol and this time hit Key in the thigh. Sickles pulled a third gun and fatally shot Key in the chest for good measure. 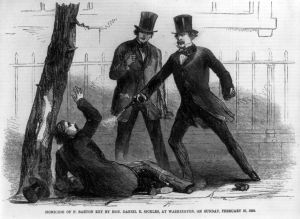 Sickles then went to see Jeremiah Black, the U.S. Attorney General, at his home, where he surrendered himself to the law.

Sickle’s stay in jail pre-trial was rather unusual. He had many visitors from the upper strata of D.C. society, all of whom he was allowed to entertain in the warden’s private quarters. The accused murderer even rec’d a handwritten note, albeit not a visit, from President James Buchanan.

At trial, although he confessed to the murder, Sickles’ legal team came up with a novel defense – that of temporary insanity triggered by the ongoing infidelity (note: one defense attorney was none other than Edwin Stanton, soon to be Lincoln’s Secretary of War – eat your heart out, O.J.!) The newspapers of the day jumped on the bandwagon, heralding Sickles for protecting the virtue of the women of Washington from the ravages of the lusty Key and others like him – never mind that Mrs Sickles was fully complicit. And although legally inadmissible, Sickles leaked his wife’s earlier forced confession to the press to further sway the court of public opinion.

“You are here to fix the price of the marriage bed!”, roared another defense attorney, John Graham, in a speech so packed with quotations from Othello, Judaic history and Roman law that it lasted two days and later appeared as a book.

The jury bought it hook-line-and-sinker. Sickles was acquitted. And as his affliction was ‘temporary’ insanity, by then resolved, he didn’t even have to spend any time in an asylum. His was the first such use of this novel defense in American jurisprudence. He basically got away with murder.

Sickles and his wife remained estranged for the rest of her short life. She died of TB in 1861 at the age of 31.

Sickles attempted to rehabilitate himself by enlisting in the Union Army at the outbreak of the Civil War. He commanded a corps at Gettysburg, lost a leg to an artillery shell, and was awarded the Medal of Honor. Still, he was accused of insubordination and disobeying orders during that pivotal battle. He spent the rest of his life trying to put a positive spin on his decisions while under fire, and his prickly relationships with commanding officers.

But he always made time for the ladies. Serving with an American diplomatic legation in London in the 1870s, he introduced his date, a high-priced prostitute, to Queen Victoria. He is also said to have had an affair with deposed Queen Isabella II of Spain while on mission in Madrid.

He died at 94 in New York City and, controversies aside, was buried in Arlington National Cemetery with full honors. His battle-severed leg resides to this day in the National Museum of Health and Medicine in Washington, D.C.