Manned space flight is inherently dangerous, and was all the moreso in the days before science had experience with liftoff, orbit, and reentry. Not counting many animals sacrificed early in the gathering of requisite safety data – the Russian dogs Laika (d. 1957 on Sputnik-2) and Pchyolka and Mushka (d. 1960 on Sputnik-6) come to mind – there still have been a number of human fatalities associated with the Soviet and American space race.

First there were early training jet accidents on both sides. 1967 was a particularly lethal year: Vladimir Komarov was the first known space-related fatality onboard Soyuz-1, and his demise was followed by the disintegration of an American X-15 while attempting to land several months later, and then the tragedy of Apollo-1. There was the loss of Georgiv Dobrovolsky, Viktor Patsayev, and Vladislav Vokkov onboard Soyuz-11 in 1971. The Challenger was destroyed in 1986, and the Columbia followed in 2003.

If accepting NASA’s definition of ‘space’ as being that realm more than 50 miles above the earth’s surface, then only the Soyuz-11 crew actually perished in space, and to our knowledge (and despite Hollywood’s movies), the bodies of all of those who have died in space programs have been recovered to earth. 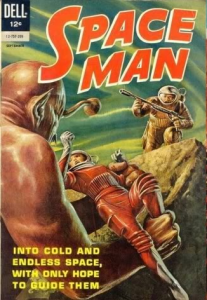 So the question remains… what would happen if someone died in space and wasn’t recovered?

If not already and unpublicized, it is bound to happen sometime. And NASA has actually looked into this, er, problem.

Without a spacesuit, a human would mercifully pass quickly in the numbingly cold oxygen-depleted void of outer space. The same, however, cannot be said for the body. The exceedingly low temperatures and the anaerobic vacuum would together sterilize a corpse, cryodessicating (a.k.a. freeze-drying) both skeletal and soft tissue elements. But radiation – the constant bombardment of gamma-, x-, and ultraviolet-rays – would eventually cause the molecules in frozen tissues to lose their atomic bonds and vaporize.

Unless, of course, the brittle dehydrated mass first collided with something and disintegrated like an antique porcelain tchotchke on a cement floor.

With a spacesuit, one’s passing might regrettably be prolonged because of the favorable internal environment, but once expired, the decomposition process would be speeded… at least while the climate control continued. Thus, a partial decomposition likely would occur inside a space-suit or -ship until the temperatures put the process on hold. Once, or if, a heat source was neared, however, the decomposition process might resume, unless the cold, lack of oxygen, and radiation had by then rendered any earthly bacteria unviable, in which case the eventual end result would be similar to that sans space-suit.

All of this is speculative of course, because research that has been done on the biological processes of decomposition and putrefaction has occurred in our living earthly biosphere filled with bacteria and other both natural and man-made environmental assailants.

And since we don’t know about the impact from atmospheres other than our own, it can’t be said with any certainty what would be the sequelae of death on another planet – or by alien ray gun.