U.S. Supreme Court Justice Joseph Lamar died in January 1916. An otherwise forgettable tenure on the High Court remains notable for the subsequent succession battle it unleashed. A week after Lamar’s funeral, President Woodrow Wilson asked the Sec’y of the Treasury, his friend Wm McAdoo, whom he might suggest to take the late Justice’s seat. McAdoo offered the brilliant Louis Brandeis, a profound liberal thinker, attorney, and social activist of the day. Wilson asked McAdoo if he thought Brandeis could be confirmed. “Yes,” McAdoo said, “but it will be a stiff fight.”

Nobody could then have known how stiff that fight would prove. 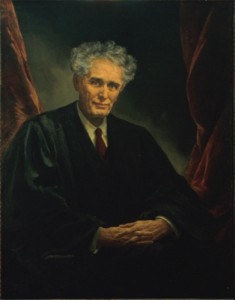 For all of his admirers, Brandeis had an equal number of enemies. Wall Street regarded him as an untrustworthy radical. Conservatives saw him as a troublemaker, an attorney who was known to rely on sociological and psychological data. The strict constructionists considered him dangerous because of his activism. Even former President William Taft privately called Brandeis’ nomination “one of the deepest wounds that I have ever [suffered] as an American and a lover of the Constitution.”

What was unspoken? Brandeis was a Jew.

To President Wilson, who had appointed the first Jewish professor at Princeton and the first Jewish Justice to the New Jersey Supreme Court, Brandeis’ faith was immaterial. What was important for Wilson was to correct what he considered his biggest mistake as President – having nominated the rabidly conservative and anti-Semitic James McReynolds to the High Court two years earlier.

Throughout the 19th century, Supreme Court nominations were usually minimally controversial processes that resulted in voting the same day that the nominee was presented. This changed with Brandeis. The Eastern Establishment lined up petitions and testimonies to bemoan and denounce the Brandeis candidacy. The Senate Committee on the Judiciary announced an investigation of the many charges leveled against Brandeis; McAdoo shrewdly urged Brandeis to ask the committee to hold their hearings in public, as he figured most of the objections would fade in the light of day. In February 1916, more than forty witnesses – largely Boston Brahmins and those on the losing sides of cases that Brandeis had prosecuted – paraded before the Senate cloaking their prejudices in rhetoric about dishonorable and unprofessional conduct.

Supporters countered. Felix Frankfurter and Walter Lippmann defended Brandeis in the press, and former Harvard President Charles Eliot sent the committee a ringing endorsement, as did nine of Harvard Law School’s eleven law professors. Former Chief Justice Melville Fuller called Brandeis “the ablest man who ever appeared before the Supreme Court of the United States.” Speaking for himself, Wilson wrote, “I cannot speak too highly of his impartial, impersonal, orderly, and constructive mind, his rare analytical powers, his deep human sympathy, his profound acquaintance with the historical roots of our institutions and insight into their spirit, or of the many evidences he has given of being imbued to the very heart with our American ideals of economic conditions and of the way they bear upon the masses of the people.”

The four-month confirmation process was as brutal as any the country had ever seen. It also opened the doors for future examinations of judicial nominees, who were soon required to defend themselves in person before the Senate.

The arguments came down to a partisan vote in committee. The full Senate confirmed Brandeis in June 1916 by a vote of 47 to 22.

Brandeis went on to a distinguished career.

But whenever Brandeis spoke in judicial conference, Justice McReynolds was known simply to rise and leave the room. He went so far as to avoid official Court pictures because he did not want to be photographed with a Jew. And when Brandeis retired in 1939, leaving an enviable legacy of decisions behind him, he received the customary laudatory letter of thanks, signed by all of his colleagues.