[Today’s post is sponsored by the Law Offices of N.V. Gardner, Esq., of Durham, North Carolina]

When mankind finally travels to the stars and sets up residence, it appears that some decidedly earthly tribulations will follow.

Hayfever, to be exact.

Lt Col Jack Schmitt, one of the Apollo XVII astronauts, developed hayfever when on the moon in 1972. Returning to the landing module after his first day of driving around in the lunar rover, he removed his helmet and almost immediately experienced a sinus reaction to the dust that coated his suit. He became clogged, started sneezing, and his nose was running, just as happens with pollen in the springtime here on Big Blue. 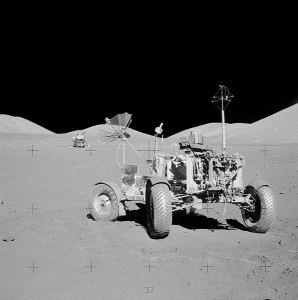 His symptoms lasted for a few hours and then abated – no word if he took Benadryl or not. But each time over the subsequent three days that he repeated his lunar exposure and then removed his helmet, the same symptoms returned, though following episodes were a bit less severe, perhaps as his body acclimated to whatever allergen was present. And although Schmitt was the only one on that Apollo flight who complained of such, he later maintained that the others had the same reaction, but were averse to admit it for fear that they might somehow be grounded.

And in case you’re wondering what is the odor of the moon, Schmitt and other astronauts have said that it smells like spent gunpowder (not ragweed).