Hybristophilia is a mental condition – termed a paraphilia – in which romantic and sexual arousal is contingent on being with a partner known to have committed serious transgressions against societal norms, the most extreme cases involving crimes such as rape, robbery, and murder. Some (usually women) who fall prey to hybristophilia believe they can change the delinquent. Some find an adrenalin rush in the forbidden and dangerous. Some crave the limelight. Some desire the ultimate alpha male. Some have difficulty forming relationships with love interests who are staid, conservative, and actually available. This is a phenom that spans the gamut, from the oft-noted tendency of the prettiest girls in the high school class to gravitate to the ‘bad boys,’ to the fact that many incarcerated criminals receive bags of fan mail, love letters, and marriage proposals – Ted Bundy, Jeffrey Dahmer, Richard Ramirez, and Charles Manson all come to mind.

Usually those who exhibit hybristophilia are not famous in their own right, but there are exceptions. Belle Starr, the bandit queen of the old West, was a middle class wife in a boring but respectable marriage who then romantically gravitated to at least three notorious outlaws before attaining criminal fame herself. Patti Hearst is another possible example.

In popular literature, this is sometimes referenced as “Bonnie and Clyde Syndrome.” And with good reason. 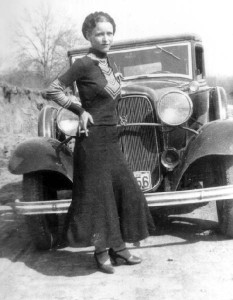 During their lifetimes, that outlaw couple’s depiction may have been at considerable odds with the hardscrabble reality, but most titillating was the whiff of illicit sex; they were wild and young and untamed and undoubtedly hormonal. But while Bonnie Parker was present at the commission of no fewer than one hundred felonies during her two years as Clyde Barrow’s lover, she was not the lethal machine-gun wielding killer portrayed by period newspapers, newsreels, and pulp detective magazines. An (almost certainly playful gag) photograph of Bonnie found by the police at one uncovered hideout showed her posing with guns in front of their getaway car. However, gang member W.D. Jones later testified that he was uncertain if he had ever seen Bonnie fire at any policeman. It seems that Clyde did all of the shooting, and many now believe that Bonnie was along for the exciting ride.

It was an exciting ride that ended on 23 May 1934 in Bienville Parish, Louisiana, when the pair was ambushed and killed by a posse sent to stop them.

Her comparative non-violence and romantic obsession notwithstanding, this is not to say that Bonnie didn’t pack heat; when her body was taken to nearby Conger Furniture Store and Funeral Home in Arcadia for autopsy and embalming following her death, a .38 Colt M1902 pistol was discovered hidden in the folds of her skirt – it sold recently at auction for almost $100,000.

One thought on “Hybristophilia”