Human nature being as it is, otherwise intelligent and rational people often get caught in the ‘it could never happen here/ to me/ to us’ mindset. Yet, history is replete with examples of disasters, those both actual and barely averted, that were watersheds in their days and resulted from dumb luck, unforeseeable timing, sheer ineptitude, and hubris.

In this November week 893 years ago, England found itself with just such a situation. Then was suffered a loss that could easily have been avoided, and one which a contemporary chronicler opined was unsurpassed in the misery it later inflicted on the kingdom. 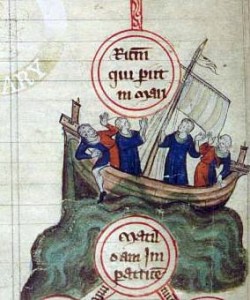 At that time, Henry I ruled over both England and Normandy, a geographic patrimony reflective of the roots of his father, William the Conqueror, from only a generation earlier. Fairly or not, Henry was perceived as a degenerate libertine, and many looked to his only legitimate son, William Adelin, as one who could advance less his prurient interests and more those of the realm.

On 25 November 1120, King Henry, heir William, and the rest of the Anglo-Norman court were in Barfleur, in northwest France, preparing to return to England. The newest ship in Henry’s fleet was la Blanche-Nef, or the White Ship, a fast galley of the highest quality and newest materials. For reasons not entirely clear, King Henry had made other arrangements for his own voyage home, but allowed many in his retinue, including the heir, several of his illegitimate issue and extended family, and a number of nobles, to sail instead on the White Ship.

No sooner were the revelers, er, royals onboard that William Adelin broke open the wine casks for the three hundred passengers.

Unfortunately the crew partook of the libations as liberally as did the passengers.

To compound matters, the White Ship’s now-inebriated contingent demanded that Capt Thomas FitzStephen overtake the monarch’s ship which had sailed only shortly prior. FitzStephen was said to have been confident that his galley could do so.

Or was he merely afraid to speak truth to power?

In a hurry to depart, FitzStephen dispensed with the customary blessing of the ship by court priests before setting sail. Still it was not until dusk that the White Ship cleared the harbour’s sea-walls and entered the Channel. Almost immediately, its port side struck a submerged rock and quickly capsized. In the chaos that ensued, it is said that William Adelin was able to swim to a small boat. Foolishly, though, he demanded that his boat head not to shore, but back to the roiling open waters to search for his stricken half-siblings. Predictably, this rescue party did indeed locate desperate survivors bobbing in the black water… and they promptly swamped William’s skiff. All drowned.

Only two survived from the entire ship: the ship’s butcher and a minor noble, Geoffrey de l’Aigle.

Although Henry I remained on the throne for fifteen more years, the stage was set. He sired no more children, and on his death warring camps coalesced around the two contenders: Stephen of Blois, the King’s nephew, and the King’s own daughter, Matilda.

Matilda was disliked because she was female, and married to a continental nobleman of suspected hostility to the Anglo-Norman court.

Stephen was male, but not the King’s progeny.

Following Henry I’s death, the resulting period of strife is known today as the Anarchy. The lack of clear-cut succession yielded the breakdown of civil order and almost two decades of armed conflict between the factions, magnified by marauding Welsh and Scottish rebels, foreign mercenaries, and restive English barons. In this war of attrition, neither contender seemed able to land a knockout blow.

Finally, in 1153, after eighteen years and countless deaths and destruction, the two sides signed the Treaty of Winchester, a document that recognized Stephen as king but allowed for Matilda’s son, the future Henry II, to be Stephen’s heir.

A final note of serendipity: Stephen himself had barely missed passage on the White Ship – due to a bout of severe diarrhea.