Because of the 24/ 7/ 365 news environment in which we live, it is easy to assume that the perceived deterioration of society in general, and the unfettered growth of psychopathy in particular, are modern phenoms. While there is no way to refute this unequivocally, I suspect that psychopaths have existed since time immemorial. We just do not realize the chronology and full extent of the rapacity because of the lack of extant records, questionable diagnostic skills of the day, and criminal investigations that were then primitive at best.

A personal case-in-point: I have visited Appley, the small town in Somerset, England, where my maternal grandparents and their parents lived in the 19th century. It is barely more than a wide spot in the road. It looks as though nothing dangerous could ever be found in those bucolic fields and forests. I doubt any resident ever locked the front door. But in 1901, my grandmother’s younger sister was accosted by an unknown assailant wielding a blunt object while on her way home one afternoon. In pre-antibiotic days, she developed peritonitis from the assault, and unfortunately prior to lapsing into coma was unable to identify the person responsible. She died shortly thereafter at the age of fourteen. Victoria was on the throne and Britannia ruled the waves. But no one was ever caught, and the hangman at Tyburn denied his due.

While not common, monsters did lurk, then as now. Anyone who has read the best-selling Devil in the White City knows this. The risk of untimely death, whether from disease and filth, incompetent medical care, accident, or the predations of the evil, was very real indeed. In the case of the lattermost, forensic science was not often able to catch the guilty.

The second case-in-point, and the topic of this post, comes from across the Pond, and is arguably worse than my great aunt’s demise if only because of the numbers involved. A family of German immigrants, the Benders, had moved west from Ohio to claim vacant lands in Labette County, Kansas, just after the American Civil War. The 160-acre property in question had been vacated by Osage Indians who were forcibly transported to their new ‘home’ on the reservation in Oklahoma. Patriarch John Bender, his wife ‘Ma’ (history does not record her given name), his son John Jr., and his daughter Kate established a small inn and general store near Cherryvale, amongst a community of likeminded spiritualists and homesteaders.

The Bender business and residence were situated directly adjacent to the Great Osage Trail, the most well-established route to points further west. The Benders became renowned, though not for their retail and hospitality endeavors. Widely distributed flyers and broadsides touted daughter Kate’s psychic skills and supernatural healing abilities, and her séances and lectures on free-love became big attractions for those passing through the area.

Unfortunately for some who stopped in Kansas on the way to California, the Benders developed renown for other reasons, especially as their inn became the final and eternal stop for many a weary traveler. Beginning in 1871, there were a series of disappearances of those heading west who seemingly never made it past Cherryvale. It took a while, but by 1873 suspicions began to circulate about the Benders themselves. A town meeting was held during which it was decided to confront John and his family… but when the townspeople arrived at the homestead, they found it deserted.

Upon entering the abandoned inn, the search party detected a horrible smell. A trap door on the first floor under a bed revealed a subterranean cavity dug into the ground, the soil of which was soaked with what appeared to be congealed blood. The men of the town then began to dig under the house, but no remains were there found. However, probing the garden and orchard next to the house was more productive, and soon produced the decomposed body of William York, a doctor who had recently been heading through town searching for family members who had themselves earlier disappeared. 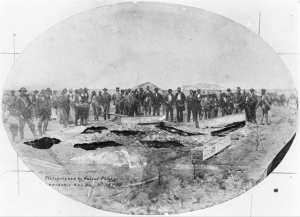 searching the Bender property (courtesy of the Kansas Historical Society)

York’s remains were not the last. Many more bodies were located in adjacent fields, a creek bed, and in the well. Eventually the number grew to over twenty. Further, there were limbs unearthed that did not match any of the intact corpses. All of the victims did have one thing in common, though – their heads had been crushed by a heavy club, and their throats were then slashed for good measure. Newspapers of the day additionally reported that the female dead had been “indecently mutilated.”

The (mostly) unclaimed remains were buried in a mass grave nearby, still known as “Bender Mound.” A sledgehammer and some cobbler’s tools found near the killing fields were felt to match the damage that had been inflicted to the crania of the dead; these implements, along with a bloodstained knife discovered in its hiding place under the mantle clock, are still on display at the Cherryvale Museum and the Kansas Museum of History (as the commercialization of Lizzie Borden, Jack the Ripper, and the Donners can attest, nothing has the power of a lurid folktale to eventually whitewash the past and draw in the tourist bucks).

And while some locals were arrested as middlemen who fenced valuables taken from murdered guests, the Benders themselves did not answer for their alleged involvement, nor were they ever brought to justice in a court of law. While there were rumors of their deaths at the hands of vigilantes, as well as tales of their escape to the badlands of Mexico, no proof was offered and no one stepped forward to claim the substantial reward money put forth by the authorities.

In fact, the trail grew cold quickly. The Benders disappeared, and were never seen again.