Canadians – by and large a kind and considerate bunch – were once as blindly homophobic as any of the McCarthyites down South. In the late 1950s, the Royal Canadian Mounted Police (RCMP) initiated a ‘scientific’ protocol to weed out homosexuals from the military, law enforcement, and civil service, deeming them a security risk. Section A-3 of the RCMP did nothing else but find and dismiss suspected homosexuals from all branches of the government.

At first this ‘gaydar’ involved following people to nightclubs – costly and deemed inefficient. Then came the “Fruit Machine,” invented by Professor Robt Wake of the Dept of Psychology of Carleton University, an otherwise prominent man of science. His device measured pupillary response, along with respirations, blood pressure, and pulse rate when a subject seated in a dentist’s chair was shown nude pictures of both men and women. Vital signs were also measured when the subject heard the words “gay,” “queer,” “drag,” and other slurs piped through a set of headphones. If the subject’s autonomic responses indicated arousal (physiologic, though not necessarily sexual), they were flagged and likely dismissed.

But the science itself was grossly flawed – depending on the light exposure in each photo, for example, the pupils could react due to nothing more than the brightness.

Never fear! Once funding for the Fruit Machine was caboshed, the RCMP fell back on good old fashioned penile plethysmography (aka ‘the postage stamp test,’ by which erections are measured while subjects are shown erotica). Not as scientifically flawed as the Fruit Machine per se, plethysmography is nonetheless still too unreliable on which to base such summary dismissals.

Both programs were terminated, but not before more than 400 otherwise innocent people lost their security clearances and jobs (and employability). 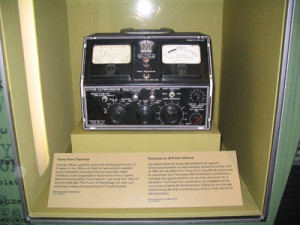 Interestingly, no Canadian versions of the Fruit Machine are known to exist, though an American model is on display at Canada’s War Museum.