[Originally published two years ago, I have reposted and added an addendum from this weekend past]

Psychological literature classifies kakorrhaphiophobia broadly as the ‘abnormal fear of failure,’ but it takes many nuanced forms. It can be seen in the pursuit of relationships, especially first dates. It sometimes rears its head in job interviews and requests for raises or promotions. It may prove the bane of academic pursuits. And in the entrepreneurial world, its presence can render one a hopeless fundraiser, a useless solicitor, or a wholly inept seller of Girl Scout cookies or encyclopedias.

In more serious cases, it’s a self-fulfilling prophesy. Those afflicted can be insecure, less-assertive, and easily manipulated due to the pathological desire to please and avoid conflict. The feared failure is, in fact, the usual outcome. Consequently, severe kakorrhaphiophobia can be crippling regarding even simple life activities.

I suffer, but in my case, it’s nothing that serious; it’s more an annoyance, stemming from my intense dislike of retail negotiating – haggling or bartering, if you will – and the desire to avoid looking foolish and being duped in the process. As a matter of fact, the only such ‘negotiating’ I enjoy is that of Priceline.com or eBay’s ‘Make an Offer,’ probably because they’re anonymous and done online – with no face-saving needed in such a venue.

I am the sort who detests buying new cars, making offers directly to owners at estate sales, or visiting native bazaars in Third World countries. I just want to learn the cost and then figure out if I can afford the item or not. I’ve been known to pay the damned price just ‘to make it all go away.’ No theatrics. No gamesmanship. Just the facts, ma’am.

My late father, who enjoyed what I deem tortuous, is spinning in his grave. Thus, imagine my chagrin at feeling as though I wear a sign, visible to all but me, that boldly proclaims, ‘Easy Mark.’

Case in point: my second child recently turned 18, and I promised her a father-daughter trip somewhere as a belated celebration. She was excited for a long weekend jaunt to NYC, complete with a Broadway show and all of the usual tourist activities.

Then she dropped the bomb: “I want to look for some knock-off designer stuff!”

I could see it coming.

The recent Saturday afternoon in question found the two of us near Mulberry and Canal Streets in lower Manhattan. We enjoyed a delicious sushi lunch and then spent time wandering up and down the avenues looking at the exotic wares, tourist schlock, and – more interesting for me as a psychiatrist – the humanity flocking the area. But paradoxically, there wasn’t a single brand-name rip-off to be seen anywhere.

I’ve spent time in Italy in years past, and I recall the Senegalese street merchants in both Florence and Rome with their counterfeit goods spread on the sidewalk on blankets (to make it easier to pack up and depart quickly when lookouts announced the approach of the Carabinieri). These hucksters were totally out-in-the-open until the cops arrived. One didn’t have to go looking in Italy, as they always found you. In droves.

But apparently that’s not so in this part of NYC. Everyone appeared – dare I say? – above-board.

I don’t consider myself naïve re: human nature, especially given two decades in penal and related forensic circles. But it took my college-age daughter – who had never been to Manhattan before – to opine the obvious:

“Maybe we have to ask someone for it?”

That seems reasonable in retrospect, but I was still remembering Italy and didn’t think any New York shopkeepers would say, “What’s that? You want some of my illegal stuff? Well, right this way….”

Nevertheless, my daughter boldly approached the closest merchant while I hung back. She asked him something. His eyes darted around. He answered her. I couldn’t hear their words, but he gestured for her to follow him. I quickly hurried to catch up, not wanting to lose her in the labyrinthine alleyways as she disappeared from sight.

The three of us snaked our way through the narrow streets for several blocks and then entered a second shop, at which time words were exchanged in a hushed foreign tongue. Quickly a large laminated card was produced. It was folded in half lengthwise and had pictures on it. From a few yards’ distance, it looked like a restaurant menu, while on closer examination, it displayed color photos of numerous ‘designer’ goods, all grouped by (purported) manufacturer, and all fake as a $3 bill. 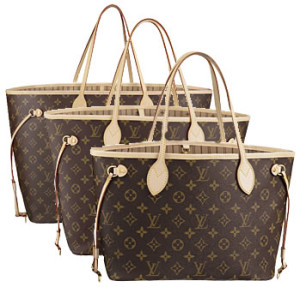 Our guide into the seamy underbelly of retail then told us that the items were kept off-site, but we could choose a few and he would go and get them for our examination.

My daughter was delighted with the options, and pointed to two Louis Vuitton handbags. The slippery dude nodded and disappeared out the door. He was gone for at least ten minutes while we cooled our heels. Finally, carrying a non-descript shopping bag, he reappeared and gestured for us to approach. I went to peer inside the bag and lift out the contents, but he quickly grasped my arm and pulled me closer behind the counter – apparently he thought the bag was still visible from the door and he didn’t want passers-by to see what was being shown.

Inside were two lovely Vuitton-looking bags. They were surprisingly well-constructed. The metal grommets and small bits of hardware were heavy and nicely formed. The interior was lined with fabric and leather of the appropriate style, and all of the trademarks were in place. The bags were wrapped in Vuitton tissue. Even the paper tags that were attached to each item were written in French and looked entirely correct.

My spawn didn’t appear disturbed by potential ethical or legal issues in the least. Like a true consumer, she immediately attached to the brown one, at which time I asked the seller the price.

He quoted X. I countered with Y (in cash). He parried with X-$30. I suggested Y+$10. He shook his head gravely and offered X-$40. I caved and said okay. For me, making two counter-offers during a negotiation was about the limit of my tolerance, and besides, the bag appeared of above-average quality and my daughter really liked it. I wasn’t about to quibble (or was it merely my kakorrhaphiophobia kicking in?)

Still, poor girl, she violated the primary tenet of such transactions before the hour was up. Even I knew better than that.

Riding back to our mid-town hotel on the 6-train, we were talking about our afternoon when an Irish couple standing near us overheard the conversation. They gestured to a bag the woman was carrying – a Michael Kors, apparently one recently obtained and of dubious provenance. Broad and knowing smiles were exchanged along with some shouted pleasantries over the background din of screeching rails as we hurtled through the dark tunnels.

And then, as only Europeans and ill-bred Americans can do, they asked the question: “what did you pay for it?”

Before I could deflect, my excited companion blurted out X-$40.

The Irish couple looked surprised and quoted a price almost half of our figure. Granted, theirs was a mere Kors, but the message was unmistakable.

I am now looking for kakorrhaphiophobic support groups in the area.

Predictably, my youngest daughter, Anna Maria, decided that she, too, wanted to go to NYC to experience the Big Apple… and find some knock-off designer haute couture and accessories. To be fair, we headed to Manhattan this weekend past to have a three-day stint of Broadway, museums, and support of illegal trademark infringement, two years to the week since my last delve into the dark side.

She worried all the way on the plane: “what if we can’t find anything there? I mean, Suzanne seemed to know where to go, but what if there’s nothing for us to purchase?”

I assured her that, as Newcastle is to coals and Eskimos are to ice cubes, we would find that for which she was looking.

We landed at LaGuardia, took a shuttle to our hotel in Times Square, and then hailed a taxi to Canal Street to get some good Chinese food for lunch and scratch AM’s itch.

As we were disembarking from the cab, I turned to pay the driver, and an elderly Asian woman approached AM and said, “you like Chanel?”

AM turned to me with a look both incredulous and confused.

“Do you have any Louis Vuitton?”

Photographs were produced on the street corner before I had even completed tipping our cabbie. A purse was selected, and out of a doorway materialized the product, wrapped naturellement in plain brown paper.

AM was delighted. But Suzanne was annoyed when she heard of this later.

“I had to work hard to find mine. AM didn’t have to do anything.”

I guess business is slow in Chinatown these days.