I was promoted to Director of Mental Health Services for the state’s prison system in September 2006. During my tenure, I served as ringmaster for more than a hundred clinicians who tended to the psyches of 38,000 felonious incarcerated souls… including those on Death Row.

North Carolina carried out its last execution at Central Prison not long after I assumed my role. Although the death penalty remains on the books, for the past seven years there has been much friction between the legislature and the state medical board as to whether executions would be allowed to resume (you see, the medical board now prohibits any licensed physician from being in attendance at an execution, and without a doc, the condemned can’t be declared dead and the show can’t go on).

Although I could see the sun brightly glistening off the dew-bespeckled concertina wire each morning from my corner office overlooking the complex, and despite the number of hours I’ve spent on the cellblocks, I had never seen the actual execution suite. I wasn’t even certain where, in the labyrinthine maze that is the prison, that room is located.

Recently, I asked the Warden if he’d show me the death chamber when he had a moment. “How ’bout in ten minutes?” he replied.

Prior to the early 1980s, executions were conducted in the ‘old section’ of the prison – the nucleus of which dates to the 1860s. Just over 30 years ago, the current execution suite was constructed in the newer part of the front building, which I then learned happens to be directly over the Warden’s head as he sits at his desk in his office!

He and I walked to the elevator past his secretary’s desk a few steps away. I had seen this elevator in the corridor next to the administrative wing for years, but never knew to where it lead. We went up one floor and exited onto a short hallway, a doorway being directly across from the elevator. There was no one around, and it was entirely quiet. The floor and walls were clean, brightly lit, and with a hint of institutional antisepsis. I sensed a yellowish tint to everything from the paint. To our left at the end of the short hallway was a room containing a black telephone. It is on this phone that last minute calls from the courts are received, if they are coming at all. Those calls can order a stay of execution at the 11th hour, sometimes when the condemned is already strapped to a gurney.

To our right, the short hallway curved leftward and out of sight.

Initially we proceeded through the doorway directly across from the elevator, which I found leads into the execution witnesses’ room. 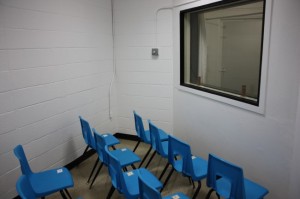 It’s an oddly-shaped and cramped little quarter. Three rows of plastic chairs remain lined up facing a window overlooking the site of the gurney, even though no execution has taken place in years. That same yellowish tint was present, and the ventilation seemed poor and the room stuffy. I can imagine when filled with a dozen witnesses, it gets hot and muggy in there quickly. And in these cramped quarters, journalists, official observers, and those from both the victim’s and convict’s families sit almost knee to knee.

That must make for some interesting small talk before the main event.

Back outside the witnesses’ room, we turned and went down the hall, around the corner, and entered what is a technician’s room. This vestibule – once again, cramped and oddly shaped – also has a window, much smaller, overlooking the site of the gurney from a different angle. During an execution, it is in this second cubbyhole that a physician and technician sit and monitor the EKG attached to the condemned for telltale signs of death.

[there are also a number of buttons on a console on the wall that have nothing to do with EKGs, but more on that in a moment]

We exited the technician’s room and turned to the left, walking in essence in a circle around the death chamber, which is roughly in the middle of this layout.

The next stop, only feet away, was the prisoner holding area. When someone is under death watch immediately prior to execution, they are brought from death row proper to a cell which is spitting distance from the chamber itself. Paradoxically, there are five holding cells in a row, though it’s unlikely that there would be more than one inmate in any of them at a given time (I don’t think this state has ever performed multiple executions in one day before).

Continuing to the left, we came finally to the entrance to the death chamber. There is ‘the’ gurney parked in the hallway just outside the portal, neatly fitted with clean white sheets as if ready to use in a few minutes. Stepping inside the room, there are small marks on the floor to show officers where to park the gurney once the condemned has been strapped into place so that everything is visible to the witnesses and the physician and technician. The death chamber, like the witnesses’ room, is not a perfect rectangle, but instead an odd rhomboidal shape, probably because the building was retrofitted for this purpose long after construction. A thin yellowish curtain – there’s that color again – hangs from the ceiling so that staff can set up the gurney before revealing it to observers once everything is in place. 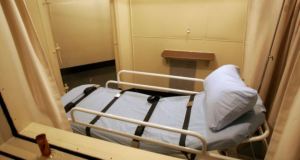 gurney in place, as seen from witnesses’ room (courtesy AP)

The biggest surprise of my tour? I had been under the impression that the current death chamber was used only for lethal injections. But it turns out that until the late 1980s, it was also the gas chamber! I was astounded to learn this because, honestly, the windows into the technician’s and witnesses’ rooms don’t look very thick. But sure enough, the sole door leading into the small room in which the executions take place is constructed airtight like those on a submarine, with steel bulkheads, heavy thick rubber gaskets, and a hatch wheel. Plus there are vents visible in the ceiling of the chamber through which the cyanide gas goes out to the roof.

Having now seen the setup, I am not certain that I’d want to be a witness with just a pane of glass separating me from instant aerosolized death.

And those buttons on the console in the technician’s room? Those controlled the flow of gas, but it was too much trouble to take them out when lethal injection became the norm, so the piping for the potassium cyanide still exists and just isn’t used.

I hope they’ve removed and stowed the canisters. I didn’t ask.

Given the difficulty that states have encountered in obtaining the necessary chemicals for lethal injection of late – and our current administration’s desire to resume executions – there is talk that we will employ other means to clear the, er, backlog. I doubt seriously that returning to poison gas would be politically palatable. However, I’m told that Old Sparky (the chair) is still stored somewhere in the bowels of the prison, so I wonder if we might be re-wiring the chamber shortly to accommodate the extra voltage needed?

Not sure, but stay tuned.