Back in the day, before the morality police decided that it is bad form for physicians to consort with pharmaceutical reps, it was common practice to give practitioners small knickknacks and doodads emblazoned with the name of a drug company or product. I still see no harm in this – I’ve not yet prescribed an Rx because the pen I was holding at the time magically forced me to write a script for the same drug that was advertised on the side – but at least for those of us in the public sector, receipt of such tokens has gone the way of the Dodo.

Regardless, I thought that this sort of marketing ploy was a relatively recent invention of Madison Avenue. Apparently I was wrong.

Phrenology was a pseudoscience popularized by Viennese-trained Franz Gall in the early 19th century (about which and whom I will write more in future posts). The discipline held that facets of an individual’s psyche, behavior, and intelligence could be discerned by examining the size, bumps, dents, and general contours of that person’s skull. Long since discredited due to lack of evidence-base and subsequent misuse by racists, phrenology was all the rage in Europe until the middle 1800s, and in America even longer than that.

Apparently different flavors of phrenology evolved from Gall’s original theories. After having lost some of its luster by 1860, phrenology regained popularity in Britain by way of the new version then being espoused by the American Fowler brothers – Orson and Lorenzo. They left their lecture circuit base in New England to travel all across the United Kingdom in the late 1860s and 1870s. Men cut from the cloth of P.T. Barnum who played to the epistemological journal clubs and pretentious middle class phrenological societies that arose in their wake, they gave (paid) lectures and demonstrations to the curious public, and made a killing in the process. Lorenzo’s commercial bent is best remembered today by the porcelain phrenology busts that he designed and marketed, his name proudly embellishing the base of each; lucky collectors can still find originals of these in pricey antique shops.

The Fowlers were the most famous of the day, but there were others. One William Bally created and marketed boxed sets of small phrenological heads, each labeled with classifications such as ‘scientist,’ ‘idiot,’ and ‘criminal.’ And not to be outdone, especially on home turf, Frederick Bridges, a then-renowned English phrenologist and author of Phrenology Made Practical, attempted to counter the commercial success of the Fowlers’ phrenology busts with his own version, made smaller and in the shape of an inkwell. 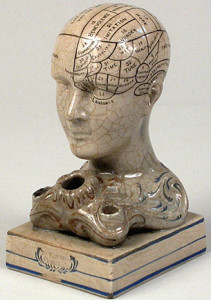 I suppose Bridges’ thought was that a diminutive and less-expensive item that could be kept on an academic’s desk and used/ observed daily (listening, Glaxo?) might be a better selling product and advertising vector.

Whether the Bally set or the Bridges inkwell made inroads on the Fowlers’ market share is unclear. Either way, by the turn of the 20th century, phrenology was all but dead, dismissed by serious clinicians and scientists alike.